Environmental matters: How to become sustainable

Christian Shelton reports on how companies operating in the lifting and transport arena are developing their sustainability status with carbon reduction a priority.

In the new and fast developing world of sustainability there is no guidebook telling the lifting and transportation industry what to do or how to do it.

A good starting point is to consider what large companies are doing as these companies have the power to exert the greatest change.

Mammoet, the largest heavy lifting and transport company in the world, is taking its environmental responsibilities very seriously –perhaps unsurprising for a Dutch company when swathes of the Netherlands are at risk of disappearing as sea levels rise due to global warming.

Mammoet maps sustainability initiative
Over the past three years Mammoet has been fully focused its environmental approach, creating a ‘sustainability roadmap’ to tackle the subject in a strategic manner without duplicating existing sustainability efforts.

Their roadmap outlines four key areas of focus, namely market leadership, sustainable engagement, efficient operations and being a responsible employer by providing a structured framework under which achieving effective change can be tackled.

Erica Gray, Mammoet’s global sustainability manager and a trained environmental scientist, said, “We have a large, diverse fleet of equipment. Most of which still runs on conventional diesel, so we are very focused on carbon reduction via de-carbonisation of equipment.”

The company is also working in partnership with clients and suppliers to lower the carbon footprint of projects.

Mammoet initiated its roadmap in 2018 and set a number of targets. Given the uncharted nature of sustainability work as well as an expanding fleet due to the acquisition of ALE in 2020, these targets are currently being revised and refocused to increase their impact.

Gray explained, “This is a reframing to gain greater insight. By revising our targets we are trying to make it really clear what we want to achieve, so that we can focus our energies on the areas we can have the most impact.”

One of Mammoet’s key headline targets is to reduce its carbon footprint by 30 per cent by 2030.

Gray added, “One angle that we have been exploring to help achieve this is the use of alternative fuel, specifically HVO fuel, for both SPMT and in some of our cranes.

Another angle that Mammoet is exploring revolves around data to quantify emissions. Traditionally the company has calculated fleet emissions based on fuel consumption, but its aim is to see more information based on individual bits of equipment.

Gray said, “Ultimately we want to look at the data and come to real-time conclusions regarding emissions, by taking data directly out of the equipment. This will become possible due to technological developments in data capture plus the Internet of Things.” 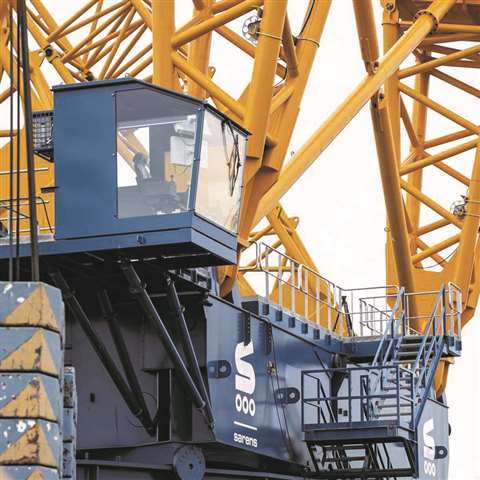 Belgium-headquartered Sarens is another global operating heavy lift and transportation company breaking new ground, specifically with regards to the use of electricity for heavy lifts.

The company launched the SGC-90 (aka Little Celeste), a fully electric heavy lift ring crane with a lifting capacity of 1,650 tonnes, in November 2020.

Little Celeste can produce its own energy, recovering and reusing the electricity it generates each time it lowers a load.

When connected to the national grid, it recovers all produced energy and feeds it back, reducing energy consumption by up to 40%. As it runs on electricity the SGC-90’s operation is silent.

Sarens claim that it is energy-efficient and environmentally friendly, emitting no exhaust and posing no oil contamination hazards.

BKL said that it is working towards electrifying its fleet. It ordered its first mobile construction crane with a hybrid drive in 2019, and is currently deploying its first electric company vehicles.

As neither electric nor hybrid machines are yet established on the market, BKL stated that it buys the newest equipment it can. Its 500-plus tower cranes boast an average age of five years, and its 100-plusmobile cranes an average age of three years.

BKL is utilising a Liebherr MK 88-4.1 in Munich, Germany, which can be operated by using electrical site power. Photo credit: Liebherr Tower Cranes

Balance between the economy and environment
BKL has a sustainability concept for its six German locations including generating electricity via solar panels on the roof and digitalisation of workflow.

By introducing online ordering and digital workflows, BKL claims that it has significantly cut paper and toner consumption throughout the company.

BKL accepts that more environmental friendly, sustainable technology currently entails greater investment than when purchasing comparable, conventional machines and vehicles. However, the company regards this as an investment in the future.

Christoph Kleiner, MD at the Liebherr-Werk Ehingen mobile crane division in Germany, said. “We are permanently working on the sustainability factor in our production plant in Ehingen.

“Our water-based paint shop was installed years ago. Many of our hall roofs are covered with solar panels, and we continue to install more.

“We are almost done renovating many of the production hall facades to decrease energy loss.”

Liebherr, a German-Swiss multinational equipment manufacturer based in Switzerland with its main production facilities and origins in Germany, is also changing the material flow inside the plant to save time and transportation.

Kleiner explained, “We are implementing a completely new parts distribution centre for production and spare parts to optimise our logistics process, to the latest building standards. The deep foundation piles are also used for geothermal energy generation.

“We are relocating our in-factory repair shop to a completely new site with the latest environmental requirements, including again solar panels and a green roof for plants. We are investing in new robotics and equipment with less energy consumption.”

In the Netherlands, Liebherr Nederland and crane rental firm Royal Wagenborg are joining forces to rejuvenate and to augment the sustainability of Wagenborg Nedlift’s crane fleet over the coming years.

Gerard Bastiaansen, managing director of Wagenborg Nedlift, commented, “This partnership proves our long-term focus on the challenge of reducing our footprint together with our suppliers.

“With this co-operation we not only opt for equipment that best meets our customer requirements, but at the same time we also reduce significant amounts of nitrogen and carbon dioxide.” 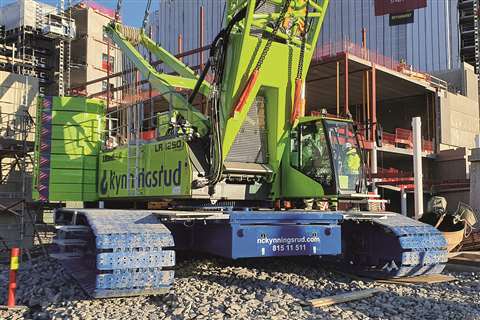 There is no loss of performance in the battery version in comparison to the same machine with diesel engine. The crane is powered by a 255 kW electric motor. It can lift loads of up to 250 tonnes, with the machine’s lifting height just under 150m.

The battery takes two hours to charge and then the crane can be used for four hours. For continuous use, the machine can also be connected directly to the mains.

Crane rental firm Kynningsrud Nordic Crane, based in Oslo, Norway, became the first company to buy one and used it to help build a new sports centre.

Eirik Kynningsrud, general manager Kynningsrud Nordic Crane, explained, “When we invest we think green, and all new machines shall have the latest environmental classification. Our focus is on an environmentally friendly machinery park and reducing our carbon footprint.”

Dutch crane and heavy equipment specialist PVE Cranes & Services is developing, in collaboration with partners, a series of fully battery-electric models. This was announced a handful of weeks following the latest offering from Liebherr.

PVE has a new company that will use the production facility in the Netherlands to manufacture the electric crawler cranes, in compliance with the Electromagnetic Compatibility (EMC) Directive, CE, TüV and other applicable regulations and standards.

The EC series will be a line of 100% battery-powered lattice boom and telescopic boom crawler cranes.

The first model produced will be the 160 tonne capacity EC160 with 43m lattice boom and 42m luffing jib. The designs were ready in early 2021, with components and parts on order. Testing of the first unit is due to begin in July/August 2021, with the inaugural machine ready for delivery in Q4 2021.

Tobias Bunne, director for environment, health, safety and sustainability at Hiab, said,“Product electrification is a vital part of the climate mission and we have already come a long way.

“Our loader cranes can be used by electric vehicles with minor, non-costly modifications. A good example is the new electric Renault trucks with HiabHiPro 142 ES-3 installed on them, which were recently delivered to Noblet Group in France.

“Automation and energy efficiency is a must. We invest our R&D resources to focus on reducing the energy consumption, either it is diesel or electricity.

“Our next generations of ePTO systems will have both lighter and longer-lasting batteries, flexible power supply and optimised movements.

“Climate change is a global crisis, which we should all address – governments, companies and individuals alike. As the world is waking up to this fact, there is also an enormous business opportunity for Hiab in offering new products and services with less impact on the climate and environment.”

Change from fossil fuel reliance
Mammoet’s Gray explained, “The fossil fuel dependence that we have all been used to for decades is changing creating exciting opportunities, particularly for collaboration and partnership working.

“In order to crack this particular nut we need to be working together, because at the end of the day it is for all of our benefit.”

Jürgen Appel, head of technology coordination at Liebherr-International, identified the opportunities presented by change when he spoke at the 2021 Liebherr Construction Industry Day.

Appel said, “What particularly excites me, about my work as an engineer for Liebherr, is that I have the opportunity to explore new territory here.

“I know that my colleagues feel the same way. We are all incredibly enthusiastic about finding the technology that will prevail in the long term out of the various technologies that are currently available, some of which are brand new.” 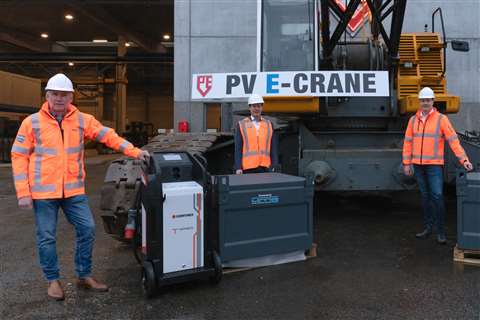 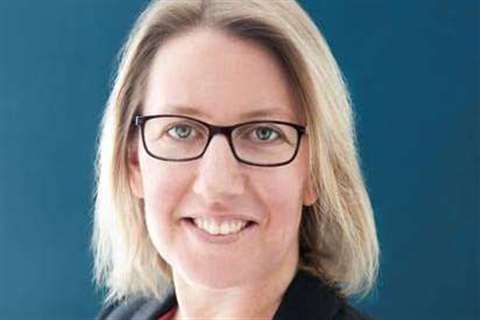 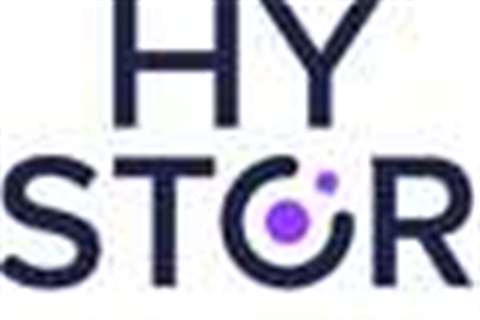