Hyzon Motors, a global supplier of zero-emissions hydrogen and fuel cell powered commercial vehicles, announced that the California Air Resources Board (CARB) has certified its Class 8, 7, and 6 repowers as exempt from emission requirements, enabling the company to sell fuel cell electric trucks in California. 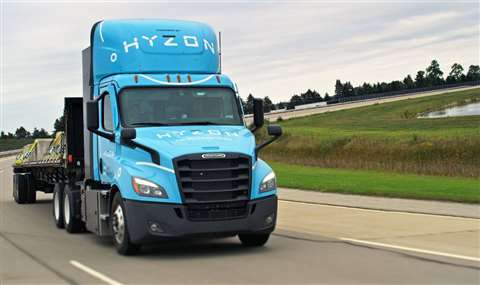 With this certification, Hyzon said expects it will offer the first commercially available repowered Class 8, Class 7 and Class 6 FCEVs in California. The company said that while FCEVs have been granted provisional approvals for trials and fuel cell electric buses have received CARB certification, it knows of no heavy- or medium-duty FCEVs that are currently available, based on the list provided by California’s Hybrid and Zero-Emission Truck and Bus Voucher Incentive Project (HVIP).

“We are proud to join the list of vehicle and technology providers certified by CARB as zero-emission, and plan to lead the deployment of fuel cell electric trucks in commercial operations in California,” said Craig Knight, CEO of New York-based Hyzon Motors. “Our technology has already proven itself in daily runs at the Port of Long Beach, and we look forward to putting more clean trucks on the road. Drayage operations are a particularly attractive use-case on hydrogen, and we expect to see rapid uptake in California.”

Hyzon Motors expects that repowering vehicles will be a more time and capital efficient approach for fleets to decouple from diesel, given long lead times for new diesel trucks. Repowering an existing vehicle is also expected to reduce customer costs, leading to Total Cost of Ownership (TCO) at or below diesel parity in California, thanks to subsidies. Additionally, the company said the repower program avoids waste and manufacturing carbon emissions generated by asset renewal.