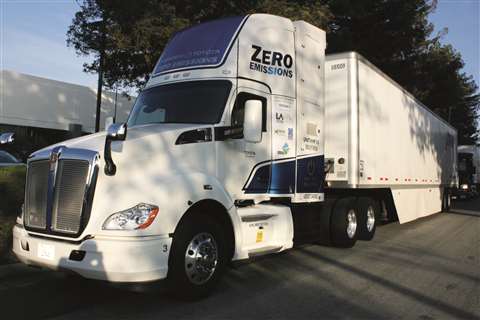 The fuel cell vehicle stores the hydrogen fuel behind the cab in a “cupboard.” (Photo: Kenworth)

Kenworth recently staged a show and tell of its electric vehicle lineup. Appropriately, it was in California’s Silicon Valley where the Paccar Innovation Center is located, close to advanced research centers of all kinds and academia to be able to share advanced developments and test them for the appropriateness for medium and heavy truck innovation.

On hand for the short, urban drives were the Class 6 K270E, the Class 8 T680E and one of the prototype fuel cell T680s currently under development with Toyota.

The truck that held the most interest for me was the fuel cell electric (FCEV). It is powered by hydrogen and its main emission is pure water. The involvement of Toyota is because the FCEV uses two fuel cells from the Toyota Mirai sedan. That vehicle is available in California, where public hydrogen fuel stations are scattered around, making the fuel reasonably available and the car reasonably practical. 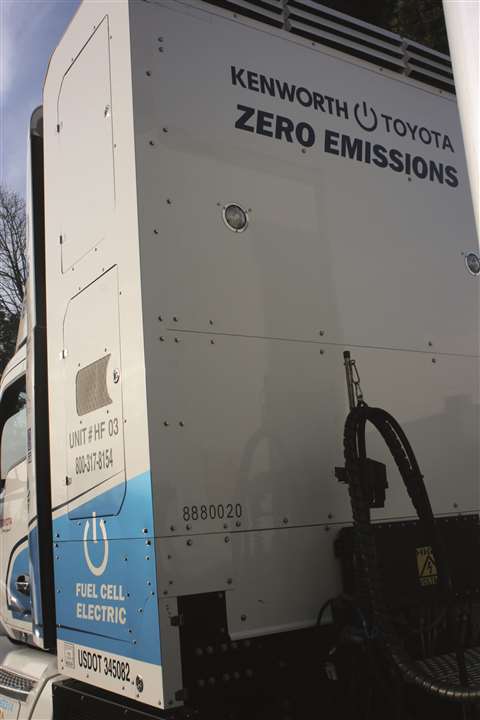 In the T680 FC, the twin fuel cells generate electric power which drives a mid-mount four-speed transmission, with the rest of the drivetrain consisting of a conventional driveshaft and tandem drive axle. Depending on application and topography, the range between hydrogen refills is around 350 miles. However, the time it takes to fill the tanks, located in a cupboard behind the cab, is comparable with a diesel truck.

The K270E Class 6 and K370E Class 7 trucks are medium-duty cabovers that are very European in character. The electric versions have a center-mounted Dana TM4 direct-drive motor and conventional driveshaft and single axle. The batteries for the all-electric drive system are mounted outside of the frame rails and are available in 141 and 282 kWh capacities, which gives the trucks a 100- or 200-mile range. Again, that depends on the application, though most likely these trucks will be used in last-mile distribution or in service such as beverage applications where routes are thoroughly understood.

Recharging is through braking regeneration on the road and by slow ac charging, which takes up to 10 hours. Fast charging using a higher power dc charger can be completed in a little over an hour, Kenworth said.

The two mediums are available for order, and delivery times are in the order of three months. However, Hank Johnson, Kenworth general sales manager for vocational and medium-duty, said at the EV presentation at the Innovation Center that getting the electric infrastructure in place can take up to a year.

The T680E is also available to order and is a full Class 8 daycab or straight truck with a range of around 150 miles. Its intended role is as a drayage hauler. It is also battery powered, with a 396 kWh capacity pack and an additional 2000 lb. allowance for the heavier powertrain/batteries, so it has a gross vehicle weight rating of 82000 lb. With fast charging, it can be recharged in around three hours.

The T680E has a different chassis layout that uses Meritor’s 14Xe electric drive axle, a 14X base axle with a motor and gears on the nose of each differential. Thus, there is no mechanical connection to the electronic controller and the drive is all-electric until it reaches the single or tandem axle.

Uniquely, Paccar is offering charging solutions through PaccarParts. Additional consulting services can be utilized to realize some of the many zero-emissions incentives and to help in the charging solution most appropriate to the operation looking to go electric.

As mentioned, I was keen to drive the FCEV, so I jumped at this unit first.

Once settled behind the wheel, you fire it up by turning the conventional looking key in its regular position, switch it on and then go to the start position briefly. The truck goes through its diagnostics checks and then gives a dash green light to show it is ready to go. The dash on this truck, incidentally, has a dedicated display for the fuel cell bits and pieces.

Then as with other Paccar automatics, you simply select drive on the steering column stalk, release the brakes and squeeze down on the accelerator.

And that brought a big surprise as this admittedly prototype vehicle was aggravatingly noisy – not the experience I was expecting from an electric drive truck. In the lowest of the four gears, there was an incredible whine caused by the pumps and fans associated with the fuel cell and three separate cooling systems. In the next gear, this was considerably less intrusive but to a large extent still there.

The short road loop was not enough road to get up into higher gears, but the Toyota development drivers seem to be pleased with the experience and are confident that this will be addressed by the time the truck goes into series production.

The performance was as expected, though, with great step-off from standstill, and lots of torque for midrange acceleration. Except for the noise, it was a pleasant driving experience. 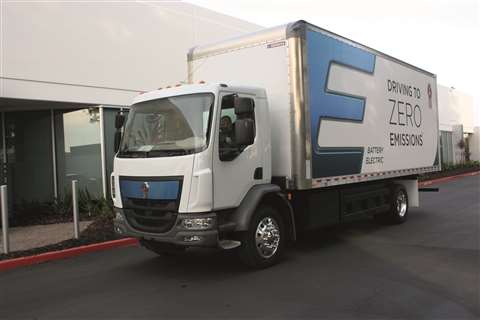 The Kenworth K207E battery electric truck is indistinguishable from its diesel counterpart until it gets underway at which point the quietness is startling. (Photo: Kenworth)

By comparison, the battery powered T680E was a magic carpet drive. It was eerily quiet and exhibited the outstanding performance we expect from an electric drive: great step-off acceleration and the ability to run up to its top speed of 65 mph in short order. The most we could get to on the short loop was 45 mph, but it felt very comfortable there. As with diesel T680s, the fit and finish of the cab could be appreciated and the generally tight, rattle-free environment could be enjoyed with the almost silent running gear.

The regenerative braking was a big plus in the driving experience, as there was little need to use the service brakes except for a final stop at the several stop signs on the loop. So while a drayage truck will work in a largely urban environment, there should be no increase in brake service – maybe a decrease.

Last, but certainly not least, was the K270E. This cute cabover is very easy to drive with diesel power, but as a battery EV it’s just a dream. It’s super quiet, turns as you’d expect a European truck and goes way better than the diesel-powered version.

It also features regenerative braking that in its maximum setting really throws you against the seatbelt.

In the right application, drivers will flock to the K270E and it could well help driver/routeman retention. Because it is very nimble with exceptional visibility, it should also prove safe, with lower accident frequencies.

The battery electric Kenworths are a real triumph of technology laid on top of proven architectures. The big question is how much will they cost? That’s where the Kenworth consultants can help. If the total cost of ownership can approach that of a diesel at the end of the day, these zero-emissions trucks are definitely worth consideration for the right applications.

Steve Sturgess is an independent trucking journalist and consultant based in Corona, Calif. He authors the monthly Street Smarts column in Diesel Progress. 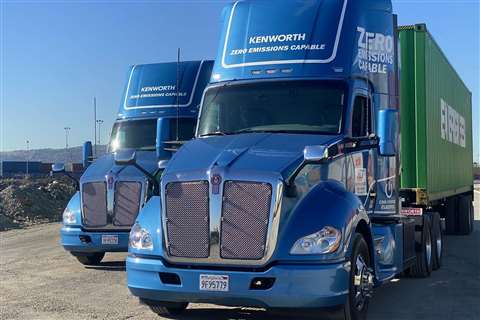 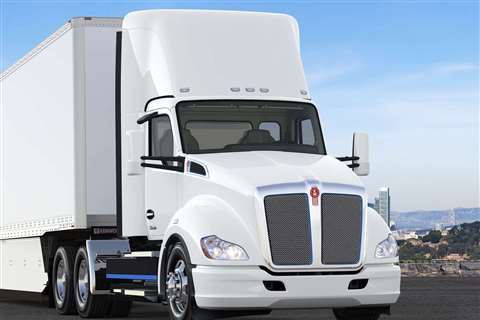 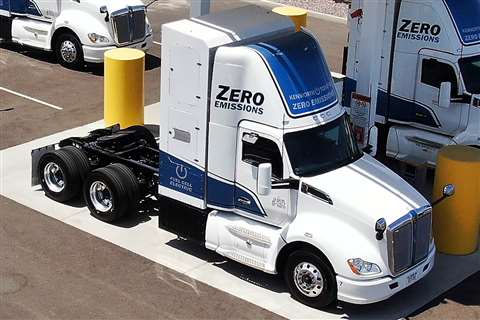