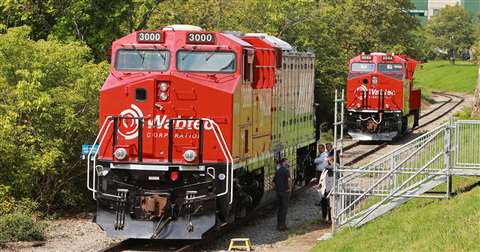 Union Pacific Railroad has purchased 10 FLXDrive battery-electric locomotives from Wabtec. The buy is reported to be the largest of its kind by a North American railroad.

Each of the locos is powered by a 2.4 MWh battery pack made up of about 20,000 individual lithium-ion cells. A dedicated HVAC system maintains battery pack temperatures, while an energy management system monitors cell health.

Charging can be completed using track side units, plus there is regenerative braking charge capture.

The packs support loco operation for between 30 and 40 minutes at full 4400 hp output. Maximum hauling weight is approximately 430,000 lb, while maximum speed is approx. 75 mph.

The locos have six axles, four of which are powered.

Rafael Santana, president and CEO of Wabtec, said: “Battery power is an ideal solution to reduce the environmental impact and costs of yard operations. Using the FLXdrive in the rail yard can significantly improve local air quality, as well as reduce noise by up to 70% for neighbouring communities.”

The locomotives will upgrade Union Pacific’s rail yard infrastructure. They will eliminate an estimated 4,000 tonnes of carbon per year from related operations.

Union Pacific is looking to reduce greenhouse gas emissions by 26% by 2030 and achieve net zero operations by 2050.

“Railroads are already the leader in low-emissions ground transportation and we believe battery-electric locomotives are the next step in our journey to eventually reach net zero,” said Lance Fritz, chairman, president and CEO of Union Pacific.

Manufactured in the US, the locomotives are scheduled for delivery in 2023.

This deal follows a similar acquisiton by Union Pacific which will see the railroad company purchase a further 10 battery-electric EMD Joule locomotives from Progress Rail, a Caterpillar company.