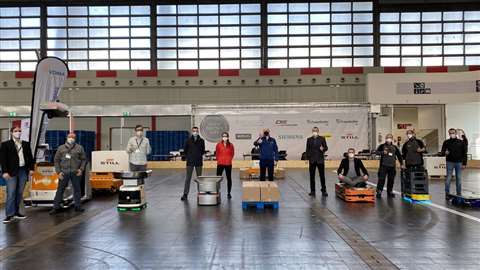 A team of automated guided vehicle (AGV) users, control system providers and AGV manufacturers, with coordination from Germany’s Association of the Automotive Industry (VDA) and the VDMA Materials Handling and Intralogistics Association has developed a new version of the VDA 5050, an open standard protocol which allows vehicles and master control systems to communicate with each other regardless of the AGV manufacturer.

Coordination of AGVs in warehouses and in production settings is becoming increasingly important and different control systems were making this more difficult.

The ‘necessary and optional’ parameters for AGVs are now clearly defined. These must be communicated in advance by the AGV to the control system with the help of a factsheet (part of VDA 5050 V2.0.0).

In addition to changes to the logic order of acceptance and adjustments to the mandatory notation of enumerations and corrections to the permissible characters and field lengths have also been implemented.

The first live test of VDA 5050 took place in Dortmund, Germany in 2021. This saw six different vehicles from different manufacturers drive together in an ‘AGV Mesh Up’ under a master control of another company. This successful premiere will be followed by a further test in 2022, during which further functions of the interface will be demonstrated.