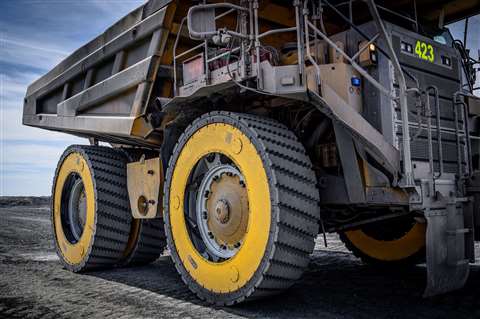 A new type of wheel could make changing tyres on off-highway mining equipment a thing of the past.

The ASW combines an inner steel hub with an outer steel drum which are connected using between eight and 12 nitrogen-filled cylinders and four to six oil-filled dampers which provide the suspension.

Steel or polyurethane slats, or treads, are fitted to the outer drum and act as a traditional tyre. Individual slats can be replaced without removing the wheel.

“The ASW is so much more than just another wheel,” said Dr. Zoltan Kemeny, president and CEO of Global Air Cylinder Wheels. “As opposed to the traditional pneumatic tire providing suspension outside the rim, the ASW suspension is located inside the wheel. Essentially, our wheels become part of the vehicle’s overall suspension system. Our wheels are an effective and viable option to rubber tires. They are cost-efficient, safer, and are better for the environment, and for those industries that rely heavily on tires.”

Based in Phoenix, Arizona, Global Air Cylinder Wheels has been developing its wheel technology for off-highway mining vehicles since 2015.

According to the company, rubber tyres for heaving mining are easy to damage, but also expensive and time consuming to replace. The ASW could do away with that expense, while maintaining vehicle availability.

In addition, the ASW is said to offer up to a 40% increase in payload capacity over rubber tyres, while reducing running costs by up to 60%. There’s also the potential for an 8% increase in fuel economy, in large part due to a 30% decrease in rolling resistance.

The reduction in rolling resistance is said to also help battery-electric vehicles achieve longer ranges and better up time.