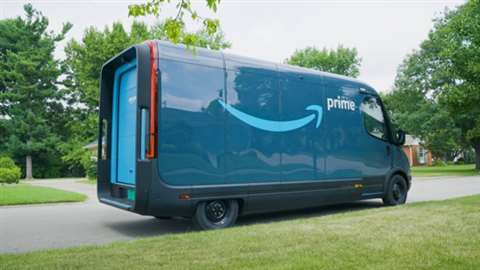 Amazon plans to roll out its Rivian custom electric delivery vehicles in more than 100 cities by the end of this year. (Photo: Amazon)

Amazon is partnering with Rivian to roll out thousands of custom electric delivery vehicles to more than 100 cities by the end of 2022, and 100,000 across the U.S. by 2030, the company stated. The electric vehicles – which Rivian asserts to be the first long-range electric commercial step-in vans – are already hitting the road in Baltimore, Chicago, Dallas, Kansas City, Nashville, Phoenix, San Diego, Seattle and St. Louis, among others.

The vehicles are a product of a partnership announced in 2019 when Amazon co-founded and became the first signatory of The Climate Pledge, committing to reach net-zero carbon across the company’s operations by 2040. As part of the pledge, Amazon is developing a more sustainable delivery fleet, the company noted, including working with Rivian to decarbonize its last-mile logistics.

“Fighting the effects of climate change requires constant innovation and action, and Amazon is partnering with companies who share our passion for inventing new ways to minimize our impact on the environment. Rivian has been an excellent partner in that mission, and we’re excited to see our first custom electric delivery vehicles on the road,” said Andy Jassy, CEO of Amazon. “Rivian was one of the first companies Amazon invested in through the Climate Pledge Fund, and we’re just getting started on our journey to have 100,000 of Rivian’s vehicles on the road by 2030.”

According to Rivian’s website, its electric commercial vans feature the RCV proprietary electric platform housing the drivetrain, braking, chassis, suspension, thermal and battery systems. The motors are designed to handle the stress of frequent stopping, plus extend battery range through regenerative braking while simultaneously reducing brake wear. Intelligent battery management systems control the high energy density modules, which are capable of charging speeds of up to 150 kW.

Jassy noted that the vehicles for Amazon were designed with driver input and feedback, plus are “among the safest and most comfortable delivery vehicles on the road today.” The vehicles have been designed from the ground up for safety, sustainability and comfort, Amazon stated, and have been thoroughly tested by drivers across the U.S.

The vehicle has embedded technology that fully integrates the delivery workflow with the vehicle, enabling access to routing, navigation, driver support and more. (Photo: Amazon)

Pre-production versions of the vehicles began field testing in 2021, delivering more than 43,000 packages and accumulating 90,000+ miles. As a result, Rivian was able to improve vehicle performance, safety and durability in various climates and geographies, as well as features to ensure driver satisfaction and overall functionality, said the company. It also completed National Highway Traffic Safety Administration, California Air Resources Board and U.S. Environmental Protection Agency certifications.

The custom vehicles are manufactured at Rivian’s factory in Illinois and include such features as:

To support the vehicles, Amazon has added thousands of charging stations at its delivery stations across the country, with plans to continue to invest in building out its charging infrastructure. The company has also partnered with nonprofit CERES and several other fleet operators to launch the Corporate Electric Vehicle Alliance to accelerate the transition to electric vehicles. 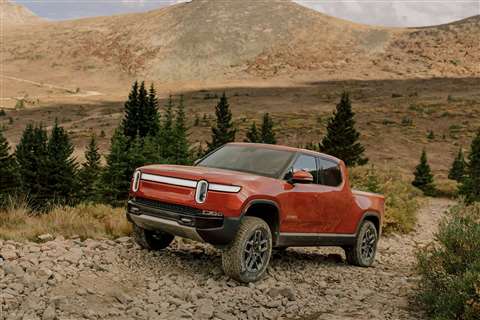 Rivian IPO could raise $67 billion
The BEV pickup and SUV manufacturer will deliver 1,000 vehicles before the end of the year 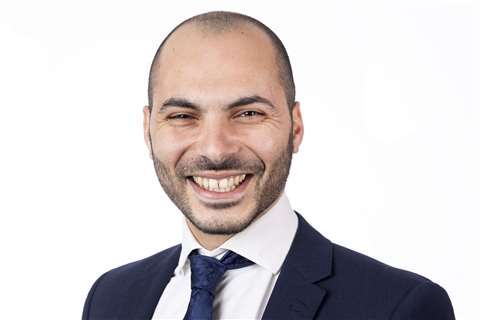