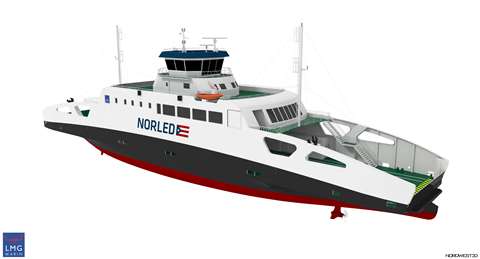 Ballard Power Systems has delivered two 200 kW FCwave hydrogen fuel cell modules to Norwegian ferry operator Norled. The fuel cells will be used to power what is being billed as the world’s first hydrogen-powered ferry, the MF Hydra.

The Hydra can carry up to 300 passengers and 80 cars, sailing on a route between Hjelmeland-Skipavik-Nesvik in Norway.

Erlend Hovland, CTO at Norled said: “This is a pioneering project. It represents a significant turning point for both Norled and the rest of the maritime sector. We believe that hydrogen will play a significant role in the future of zero-emission ships. The delivery of the fuel cell modules from Ballard enables us to continue our work to deliver and operate the world’s first ferry to be fuelled by liquid hydrogen.”

The FCwave modules were designed, manufactured and tested at Ballard’s Marine Center of Excellence in Hobro, Denmark. They were approved by DNV, a leading classification and certification group. This included confirmation that the module design conforms to recognised marine industry quality and safety standards and regulations, together with international conventions.

Søren Østergaard Hansen, GM, Marine and Stationary, Ballard Power Systems Europe commented: “The handover of the FCwave modules to Norled marks an important milestone for Ballard and demonstrates that hydrogen fuel cells are out of the starting blocks and on the way to lead in zero-emission technologies for the marine industry.

“Through the experience gained in projects with Norled and other marine partners, we have taken a big step towards the goal of receiving the official Type Approval from DNV, which will certify that the FCwave has met the functional, design, documentation and safety requirements necessary for global marine commercialization.”

The Norwegian government has published an action plan that includes a 50% reduction in the emissions of shipping and fishing vessels by 2030. This includes the introduction of requirements covering zero-emissions cruise ships and ferries operating in World Heritage Fjords no later than 2026. This will make the fjords the world’s first zero-emissions sea zone.