Proceeds to be used to expand truck production

Battle Motors, formerly Crane Carrier Company (CCC), said it has completed a Series B investment round with $150 million in new growth capital from a cornerstone global institutional investor. This capital raise follows a $120 million Series A investment round announced in December 2021.

The company has executed its expansion plans since acquiring CCC in 2021. Since then, the company has grown production throughput at its New Philadelphia, Ohio, manufacturing facility from less than one truck per day to its current daily throughput of approximately six trucks per day through increased automation, expanded floor space to 325,000 sq. ft., and reportedly tripling its workforce to 300 employees.

The company said that striving for daily continuous improvement gave it the ability to increase production within its legacy footprint while construction was still underway.

“Challenging ourselves to learn from adversity and to be better every single day has built the exceptional team necessary to reach all our goals. Now we have the manufacturing facility to match.” said COO Cody Boggs.

The company said that development and commercialization of a reliable severe-duty electric truck has been core to its strategy, and it recently announced FMVSS certification for its electric truck line.

Complementing the EV rollout, Battle Motors has developed a Smart Cab platform which has Advanced Driver-Assistance Systems (ADAS) and a proprietary connectivity software system, RevolutionOS, designed to deliver actionable data to drivers and fleet managers for enhanced safety, efficiency, and security. Battle Motors is now delivering its Class 8 severe-duty electric truck to refuse customers and serves over 750 municipal customers through 180 dealers in over 320 locations across the United States and Canada.

“Receiving FMVSS certifications and moving into production on our first EV model validates our team’s perseverance in creating revolutionary innovations and expanding our EV capabilities allows us to create even more disruptive technologies to deliver to the market,” said CTO Kelleigh Ash.

The company said the proceeds from the capital raise will be used to expand production throughput to 16 trucks per day, fulfill existing order backlog, expand EV manufacturing capabilities, and general corporate purposes.

Patterson started Battle Motors in 2021. He was the founder of Romeo Power Technology, which was recently acquired by electric truck builder Nikola.

BTIG LLC served as financial advisor to Battle Motors in connection with the capital raise. 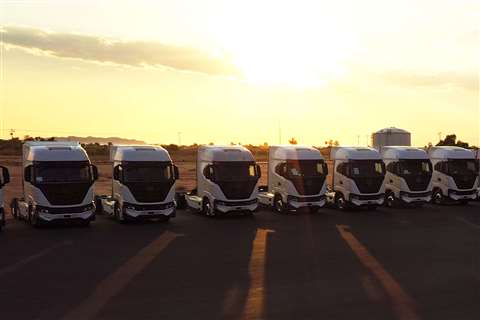