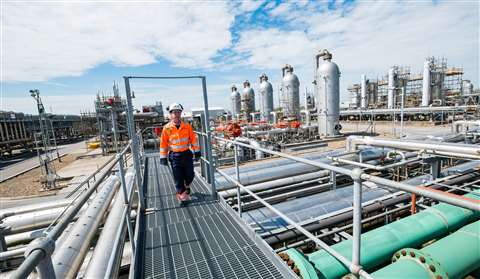 Aldbrough Gas Storage, which could be converted to holding hydrogen

Equinor and SSE Thermal have awarded two contracts for work related to a proposed hydrogen storage facility in Aldbrough, located near Hull on the east coast of the UK.

The Aldbrough Hydrogen Storage project aims to either store low-carbon hydrogen at an existing natural gas storage facility, or at a new hydrogen storage site adjacent to Aldbrough Gas Storage.

With a capacity of 320 GWh, the site would store sufficient gas to power the equivalent of 860 hydrogen buses for a year.

Engineering company Atkins has been awarded the contract covering feasibility studies assessing the design of the hydrogen storage caverns, together with the corresponding pipeline that will move gas from the proposed Humber Low Carbon Pipelines being developed as part of the Zero Carbon Humber partnership.

The outcome of the assessment will provide a foundation for the project’s next phase, including the option for subsequent pre-FEED (front-end design) work.

Environmental Resources Management (ERM), a sustainability consultancy, has been contracted to review environmental, health, safety and permits related to the scheme. These are said to be key in fulfilling the future production, usage and value chain issues.

Hydrogen is considered a key element in achieving the UK’s net zero goals. Such storage installations will support creation of the hydrogen economy, balancing production with supply and delivery. It can also serve as backup for renewable energy sources.

Equinor, which already operates hydrogen, carbon capture and renewable projects across Europe, has plans to reach 1.8 GW of hydrogen production in the Humber region. This is about 30% of the government target for 2030.

The company recently announced that it would assess hydrogen town trials in Northern Lincolnshire, in addition to the Aldbrough project and development of what is described as the world’s first 100% hydrogen power station at Keadby, near Scunthorpe.

The company’s flagship H2H Saltend project producing low-carbon hydrogen is intended to decarbonise and support the switch to the fuel at Saltend Chemicals Park, one of the region’s most carbon-intensive sites. The H2H Saltend scheme will be submitted to the second phase of the government’s Cluster Sequencing Process in late January.

The Aldbrough site is forecast to come online in 2028.