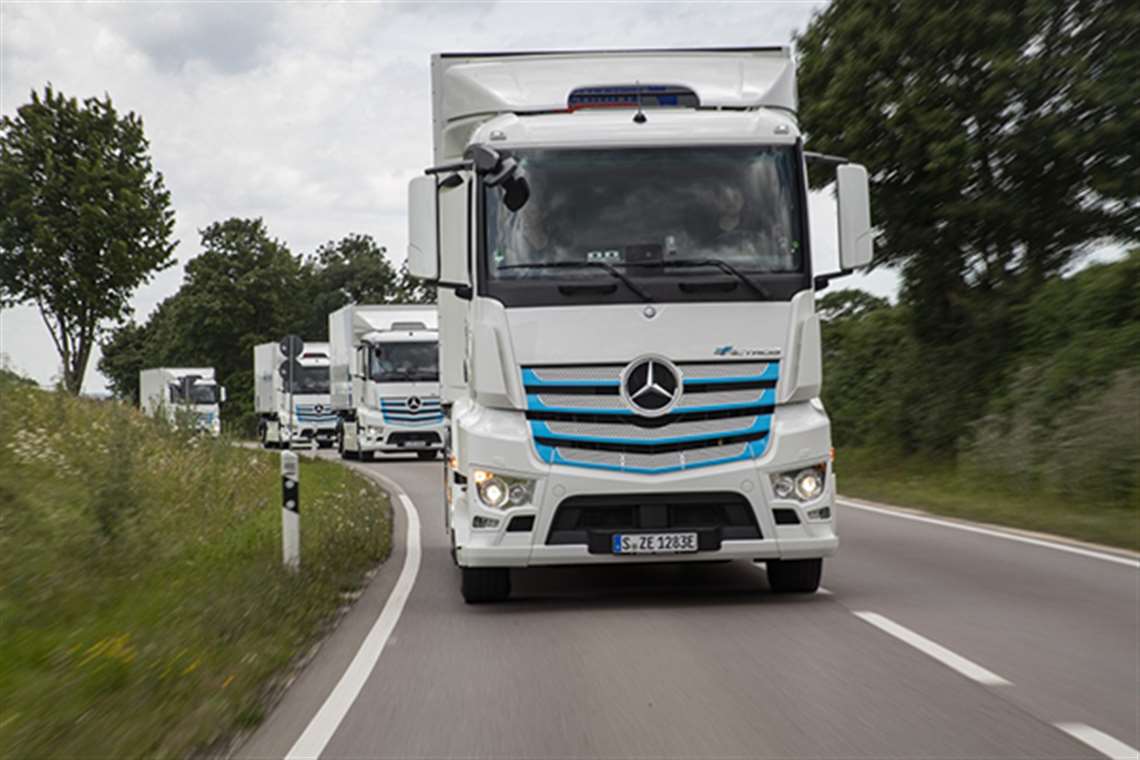 Findings from extensive test programs leading to commercial launches by 2022

Daimler Trucks & Buses is marking another milestone on the road to the electrification of its vehicle portfolio, as it said customers worldwide have covered more than 4.2 million miles (7 million km) with battery-powered, locally CO2-neutral trucks and buses.

The company said that positive customer feedback and findings from intensive practical tests with electric trucks from Mercedes-Benz, Fuso and Freightliner show that the electrification of road freight transport is already feasible today. In addition, the Mercedes-Benz eCitaro electric city bus is already in series production since 2018 and in customer use in various European cities.

“As one of the world’s largest commercial vehicle manufacturers, we have the ambition to be the innovation and technology leader also with alternative drive systems,” said Martin Daum, chairman of the board of management of Daimler Truck AG and member of the board of management of Daimler AG. “For example, our locally CO2-neutral city bus eCitaro has been in series production since 2018 and electrifies public transport in many cities.

“With our electric trucks, we aim to offer our customers electric vehicles that are on a par with conventional trucks in terms of availability and performance as well. This motivated us to place electric trucks in the hands of customers at an early stage. Thanks to our global presence, customers all over the world are testing various vehicle concepts in diverse practical applications. This represents a strong competitive advantage. Thanks to the close dialog with our customers and the many test kilometers we have covered, important findings have been flowing directly into the series development of our electric trucks for several years now.”

Mercedes-Benz Trucks was the world’s first manufacturer to present a heavy-duty electric truck at the IAA Commercial Vehicles Show in 2016. With the all-electric eActros truck, Mercedes-Benz Trucks is demonstrating that heavy-duty distribution transport for urban areas can already be locally emission-free. The eActros, which has a range of approximately 125 miles (200 km), has been operating in urban distribution transport in a wide range of practical applications with various customers in Europe since 2018. Series production is scheduled to start in 2021.

The first practical applications of the Mercedes-Benz eEconic low-floor truck, which is based on the eActros, were announced in 2020 and are planned for next year. Series production is scheduled to start in 2022. The eEconic is mainly used as a waste-collection vehicle in urban waste-management. This, the company said, is suitable for battery-electric trucks due to the comparatively short and planned routes of about 62 miles (100 km) with a very high proportion of stop-and-go operation.

The light-duty FUSO eCanter had its world premiere in September 2017 and is being delivered to numerous customers worldwide, Daimler said. More than 170 Fuso eCanter light-duty trucks are already in use with numerous customers in Japan, the United States and Europe, and more of them will be handed over successively, the company said. The range of the 7.49-ton truck of 62 miles (100 km) is designed to cover the requirements of customers in urban distribution transport. With a fast charger, the charging time can be reduced to about 1.5 hours, Daimler said. The eCanter is produced in Kawasaki, Japan and in Tramagal, Portugal.

In North America, the Freightliner eCascadia and the eM2

In the United States, the heavy-duty eCascadia and the medium-duty eM2 were premiered in Portland in June 2018. Both electric trucks are currently undergoing practical tests with customers in the United States.

The test fleet comprises 38 vehicles in a variety of applications including regional and local distribution, food distribution and parcel delivery. The vehicles have a target range for series production of up to 229 miles (370 km) for the eM2 and up to 250 miles (400 km) for the eCascadia. Series production of the eCascadia is scheduled to start in mid-2022 and of the Freightliner eM2 in late 2022.

An electric bus developed and manufactured in Germany

With the all-electric Mercedes-Benz eCitaro, Daimler Buses has been offering a locally emission-free city bus for environmentally friendly public transport in cities and metropolitan areas since 2018. The eCitaro is based on the Citaro urban bus and Daimler said It is the first and only fully-electric urban bus to be developed and manufactured in Germany.

Daimler Trucks has the ambition to offer only new vehicles that are CO2-neutral in tank-to-wheel operation by 2039 in Europe, Japan and North America. By the year 2022, the vehicle portfolio in the main sales regions of North America, Europe and Japan should already include series-produced vehicles with battery-electric drive, the company said.

In the second half of the 2020s, Daimler Trucks plans to add electrically powered fuel-cell trucks running on liquid hydrogen to its series-production portfolio. The ultimate goal is CO2-neutral transport on the roads by 2050.