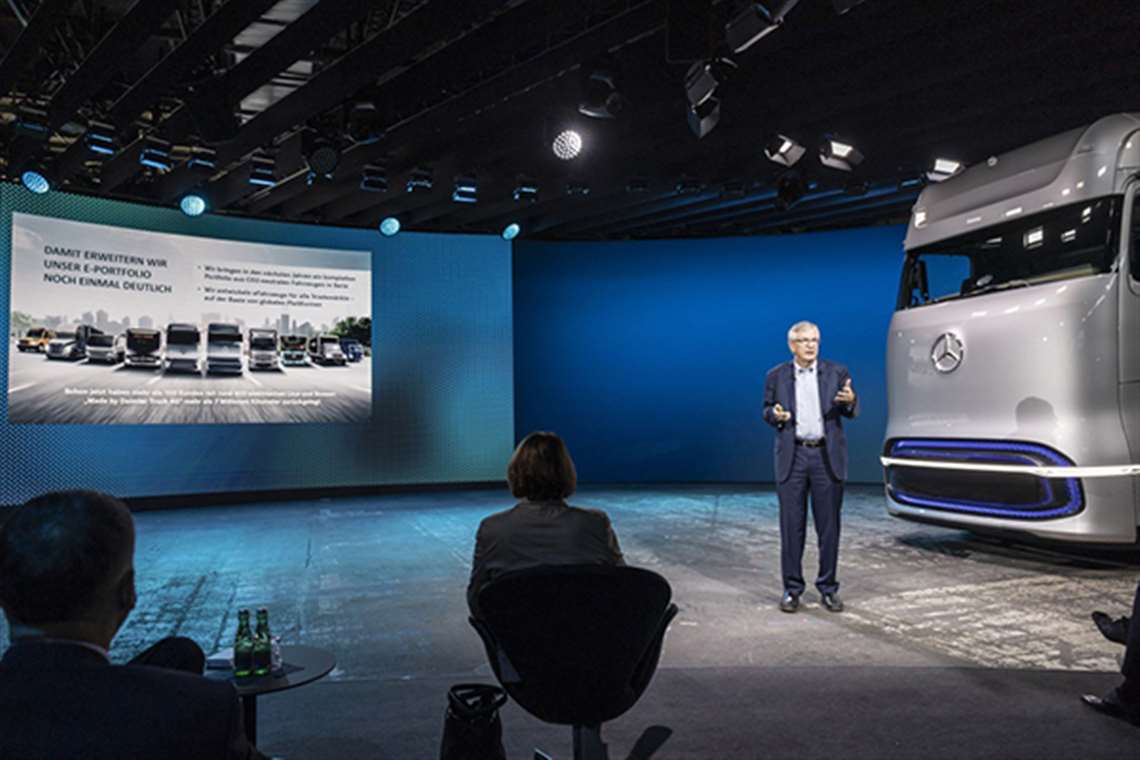 Daimler Trucks today presented its technology strategy for the electrification of its vehicles, ranging from urban distribution to international long-haul transport.

At an event in Berlin, Germany, the company focused on the technology for hydrogen-based fuel-cell trucks for long-haul transport. The Mercedes-Benz GenH2 Truck, which had its world premiere as a concept vehicle, marks the beginning of fuel-cell drive, the company said.

With the GenH2 Truck, Daimler Trucks is demonstrating for the first time which specific technologies the manufacturer will use to enable heavy-duty fuel-cell trucks to perform flexible and demanding long-distance haulage operations with ranges of up to 1000 km (621 miles) and more on a single tank of hydrogen. Through the use of more energy-dense liquid instead of gaseous hydrogen, the vehicle’s performance is planned to equal that of a comparable conventional diesel truck.

Daimler Trucks said it plans to begin customer trials of the GenH2 Truck in 2023, with series production to start in the second half of the decade.

Daimler Trucks also presented for the first time a preview of a purely battery-powered long-haul truck, the Mercedes-Benz eActros LongHaul, which is designed to cover regular journeys on plannable routes. The company said it plans to have the eActros LongHaul ready for series production in 2024. Its range on one battery charge will be approximately 500 km (310 miles). With the Mercedes-Benz eActros for distribution transport, which debuted in 2018 and has been tested intensively since then by customers in everyday transport operations, Daimler Trucks will start series production of a purely battery-powered heavy-duty truck next year. The range of the series-produced eActros on one battery charge will significantly exceed that of the prototype’s approximately 200 km (125 miles), the company said.

Daimler Trucks said it is pursuing similar vehicle schedules for the North American and Japanese markets as it is for Europe. By the year 2022, Daimler Trucks’ portfolio in its main sales regions – Europe, the USA and Japan – is to include series-produced vehicles with battery-electric drive. The company also has the ambition to offer only new vehicles that are CO2-neutral in driving operation in Europe, North America and Japan by 2039.

As a new worldwide modular platform architecture, Daimler said its ePowertrain will be the technological basis of all medium- and heavy-duty CO2-neutral, all-electric series-produced trucks it produces, whether powered purely by batteries or by hydrogen-based fuel cells. With the ePowertrain, Daimler Trucks plans to achieve synergies and economies of scale for all relevant vehicles and markets.

“We are consistently pursuing our vision of CO2-neutral transport with a focus on the genuinely locally CO2-neutral technologies battery power and hydrogen-based fuel cells, which have the potential to succeed in the market in the long term,” said Daum. “This combination enables us to offer our customers the best vehicle options, depending on the application. Battery power will be rather used for lower cargo weights and for shorter distances. Fuel cell power will tend to be the preferred option for heavier loads and longer distances.”

“Our customers make rational purchasing decisions and are unwilling to compromise on their trucks’ suitability for everyday use, tonnage and range. With our alternative drive concepts from Mercedes-Benz – the GenH2 Truck, the eActros LongHaul and the eActros – and our electric trucks of the Freightliner and FUSO brands, we have a clear focus on customer requirements and are creating genuine locally CO2-neutral alternatives for them. We have now set out the key technological specifications of our electric trucks so that the requirements are known to everyone involved at an early stage.

“It is now up to policymakers, other players and society as a whole to provide the right framework conditions. To make CO2-neutral all-electric vehicles competitive, regulatory and government action is needed, including the necessary infrastructure for charging with green electricity and for the production, storage and transport of green liquid hydrogen.”

The development engineers at Daimler Trucks have based the GenH2 Truck on the capabilities of the conventional Mercedes-Benz Actros long-haul truck with regard to tractive power, range, and performance. For example, the series-production version of the GenH2 Truck will have a gross vehicle weight of 40 tons and a payload of 25 tons. Two special liquid hydrogen tanks and a fuel cell system will make this high payload and long range possible, the company said.

Daimler said it can draw on existing expertise for the development of liquid hydrogen tanks and will also cooperating closely with an unnamed partner. With regard to fuel cells, the company also said it has much in-house experience and will also benefit from the preliminary, non-binding agreement it formed with the Volvo Group to establish a new joint venture for the development to series maturity, production and commercialization of fuel-cell systems for use in heavy-duty commercial vehicles and other applications.

Daimler Trucks said it prefers to use liquid hydrogen (LH2) because of its significant energy density versus gaseous hydrogen. As a result, the tanks of a fuel cell truck using liquid hydrogen can be much smaller and due to the lower pressure, significantly lighter. This gives the trucks a larger cargo space and higher payload. At the same time, more hydrogen can be carried, which significantly increases the trucks’ range. This makes the series GenH2 Truck, like conventional diesel trucks, suitable for multi-day, difficult to plan long-haul transport and where the daily energy throughput is high.

Daimler Trucks is currently pressing ahead with the development of the necessary tank system technologies to make liquid hydrogen usable also in mobile applications as an energy source for series-produced fuel-cell trucks. The storage of cryogenic liquid hydrogen at -253º C is already common practice in stationary applications such as in industry or at hydrogen filling stations. This also applies to the transport of liquid hydrogen as cargo, the company said.

The two stainless steel liquid-hydrogen tanks intended for the series version of the GenH2 Truck will have a combined storage capacity of 80 kg (21 gal.) for covering long distances. The tank system consists of two tubes, one within the other, that are connected to each other and vacuum insulated. In the series version of the GenH2 Truck, the fuel cell system is to supply 300 kW and the battery will provide an additional 400 kW temporarily. At 70 kWh, the storage capacity of the battery is relatively low, as it is not intended to meet energy needs, but mainly to be switched on to provide situational power support for the fuel cell, such as during peak loads while accelerating or while driving uphill fully loaded.

At the same time, the relatively light battery allows a higher payload, the company said. It will be recharged in series production vehicles through braking energy regeneration as well as excess fuel cell energy.

Daimler said a core element of the sophisticated operating strategy of the fuel cell and battery system is a cooling and heating system that keeps all components at the ideal operating temperature, thus ensuring maximum durability. In a pre-series version, the two electric motors are designed for a total of 230 kW (308 hp) continuous power and 330 kW (442 hp) maximum power apiece. Torque for each motor ranges from 1577 to 2071 Nm (1163 to 1537 lb. ft.) respectively.

The Mercedes-Benz eActros LongHaul battery powered long-haul truck will be in the same vehicle class as the GenH2 truck. Its features will be largely identical to those of the series produced GenH2 Truck or a conventional diesel truck. The comparatively short range of the eActros LongHaul on one battery charge is offset by its high energy efficiency, as battery electric drive has the highest efficiency among alternative drive systems, Daimler said.

Many long-haul applications for transport companies do not require a range greater than the approximately 500 km (310 miles) that the eActros LongHaul will be able to cover on one charge, Daimler said. In addition, legal requirements regarding drivers’ operating times can in some cases limit the need for longer ranges, the company said.

In the EU, for example, truck drivers must take a break of at least 45 minutes after 4.5 hours of driving. During this time, thanks to the latest charging technology, the battery can be charged with a large proportion of the energy needed for the ongoing journey, Daimler said.

The issue of charging infrastructure

With its market launch in the middle of the decade, the eActros LongHaul will be available some time before the GenH2 Truck. Daimler said the required infrastructure can also be set up sooner – and at comparatively low cost – by the transport companies themselves for charging at their depots. The company said that “depot charging” is the most important step for the use of the eActros LongHaul, and means that the first areas of application can already be covered.

Another key component is opportunity charging for range extension, for example, while unloading or loading. In the future, Daimler said public charging at publicly accessible stations along main transport routes will also become increasingly important – a nationwide charging infrastructure will maximize the operating range of battery-electric trucks. New, more durable batteries will also contribute to the competitiveness of battery-electric trucks, reducing total cost of ownership over a vehicle’s lifecycle.

At the International Commercial Vehicles Show in 2016, Daimler Trucks was the first manufacturer worldwide to present a heavy-duty electric truck. In early 2018, Daimler Trucks celebrated the world premiere of the further developed Mercedes-Benz eActros, and intensive practical tests have been taking place with customers since the fall of 2018. Since then, findings from customer testing have flowed directly into the further development of the prototype into a series production vehicle. So far, they have shown that the purely battery-electric eActros is outstandingly suited for sustainable heavy-duty distribution transport. It is in no way inferior to a conventional diesel truck in terms of availability and performance.

Daimler said the series production eActros will be significantly superior to the current prototype in some aspects, such as range, drive power and safely. The series-production eActros will be on a par with a conventional Actros also in terms of payload. The eActros will be launched as a two-axle and three-axle truck. Daimler Trucks will embed the vehicle in a holistic ecosystem that includes consulting services for electric mobility, such as analyzing routes, checking possible subsidies, supporting operational fleet integration and developing suitable charging-infrastructure solutions.

Within the context of its global platform strategy, Daimler Trucks is also using a globally uniform basic ePowertrain architecture for all electric trucks. The technological heart of the ePowertrain, as a first step, is the eDrive integrated electric drive in the form of an e-axle with one or two integrated e-motors including transmission. The eDrive is an in-house development by Daimler, which said it offers numerous advantages over concepts because of its one central motor. For example, Daimler said the more compact design allows a larger space to install a larger battery with a higher capacity, which has a positive effect on range. The high battery capacity also ensures high power transmission to the e-axle, thus allowing continuous power delivery. The recuperation potential also increases due to the combination of a large battery with very powerful e-motors.

The eDrive will be applied in various vehicles at Daimler Trucks in the medium- and heavy-duty segment worldwide, whether with purely battery-electric or hydrogen-based fuel-cell drive. The eDrive is designed as a drive family consisting of different variants, the first of which will have its premiere in the series-produced version of the Mercedes-Benz eActros. Within a modular system, the eDrive can be tailored to suit the market, segment and vehicle type, the company said.