DC fast charger supplier Tritium to be listed on Nasdaq

Tritium, a Brisbane, Australia-based developer and manufacturer of direct current (DC) fast chargers for electric vehicles (EVs), and Decarbonization Plus Acquisition Corp. II (DCRN), a special purpose acquisition company (SPAC), have entered into a definitive agreement for a business combination that would result in Tritium becoming a publicly listed company. Upon closing of the transaction, the combined company will be named Tritium and is expected to be listed on the Nasdaq and trade under the ticker symbol DCFC.

Founded in 2001 by Dr. David Finn, James Kennedy, and Dr. Paul Sernia, Tritium designs, develops and manufactures proprietary hardware for DC fast charging. The company has a history in advanced power electronics and electric transportation, starting as a developer of technology for solar race cars and other projects, like the battery management system for James Cameron’s Deepsea Challenger submersible.

The company said it is well positioned to benefit from accelerating and sustained long-term growth of the global passenger EV market, which is projected to have a compound annual growth rate of nearly 20% through 2040. Global EV charging hardware sales are projected to have an average CAGR of more than 25% each year over this period.

Tritium has reportedly provided more than 2.7 million high-power charging sessions across 41 countries, delivering over 55 GWh of energy. The company’s intellectual property includes a  liquid-cooled, IP65-rated charger, providing customers with technology that is ingress-protected and sealed from outside elements.

Tritium Chief Executive Officer Jane Hunter said, “The accelerated electrification of the transport sector globally is now underway and has extraordinary implications beyond the benefits to individual consumers. Our industry is essential to achieving global emission reduction targets both through increased adoption of electric vehicles and the deployment of EVs for mass energy storage technology. As ‘batteries on wheels,’ EVs will help pave the way for more renewable power to be introduced into national energy mixes. E-mobility also plays a critical role in improving air quality, which is critical for public health in populated regions.

“The agreement between Tritium and DCRN is a vote of confidence in Tritium’s vision and market viability as well as the e-mobility industry as a whole. We plan to expand to three global manufacturing facilities, expedite product development, grow our global sales and service operations teams, and so much more. This agreement funds that growth plan, enabling us to expand our business operations, enhance our products, and provide even more services to our customers.”

The transaction is anticipated to generate gross proceeds of up to approximately US$403 million (AUD$520 million) of cash, assuming minimal redemptions by DCRN’s public stockholders. The funds will be used to fund operations and growth. The pre-money enterprise value of the combined company is US$1.4 billion (AUD$1.8 billion) at the price of US$10 per share, excluding cash to go to the balance sheet. 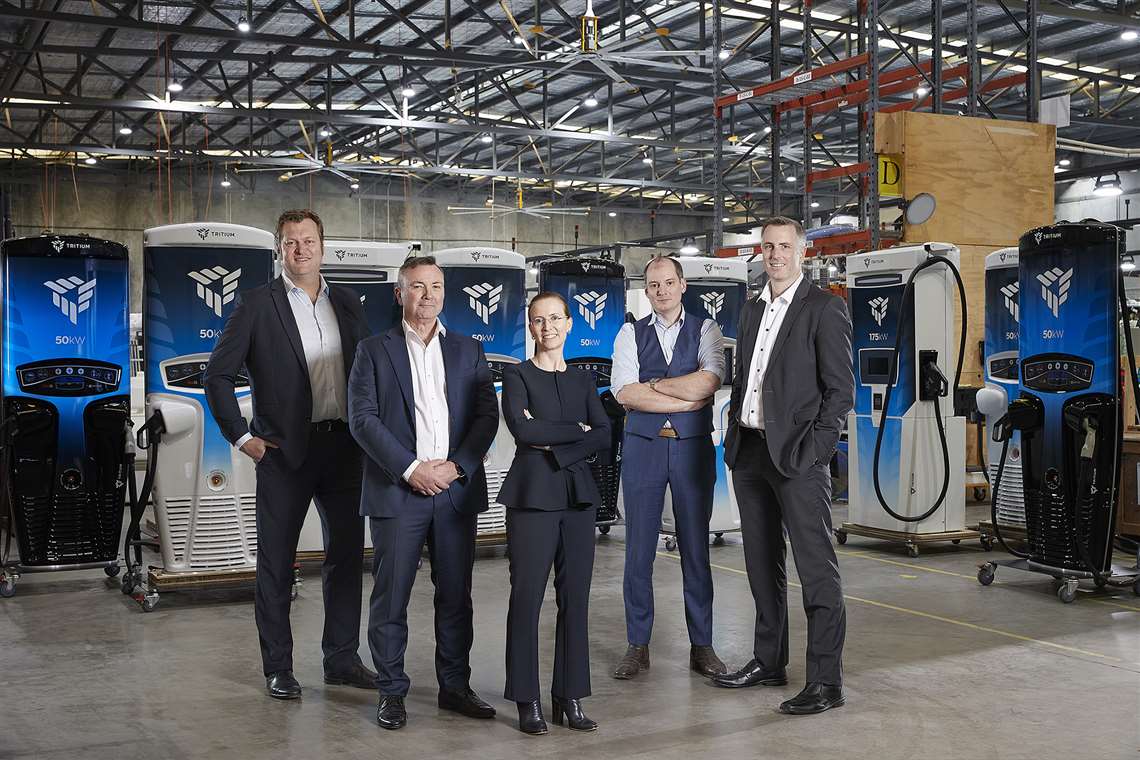 The boards of directors of both Tritium and DCRN have approved the proposed transaction.

“We are extremely excited and honored to partner with Tritium, as we believe the company’s demonstrated track record of innovation in power electronics and its well-established manufacturing and operational structure will allow Tritium to maintain and expand its position as a market leader in the charging hardware space,” said Robert Tichio, Chairman of DCRN, who will join the board of directors of the combined company at the close of the transaction.

“Under Ms. Hunter’s leadership, the company has developed an incredible team of more than 340 employees on four continents and a diversified base of blue-chip customers, while positioning Tritium to be the leader in DC fast charging as the adoption of electric vehicles continues to accelerate. As the wave of investment capital directed to environmental, social, and corporate governance goals continues its acceleration, we believe a publicly traded Tritium will serve as a valuable core holding for ESG investors. We look forward to working with Jane and the entire Tritium team to speed the efficient electrification of global transport.”