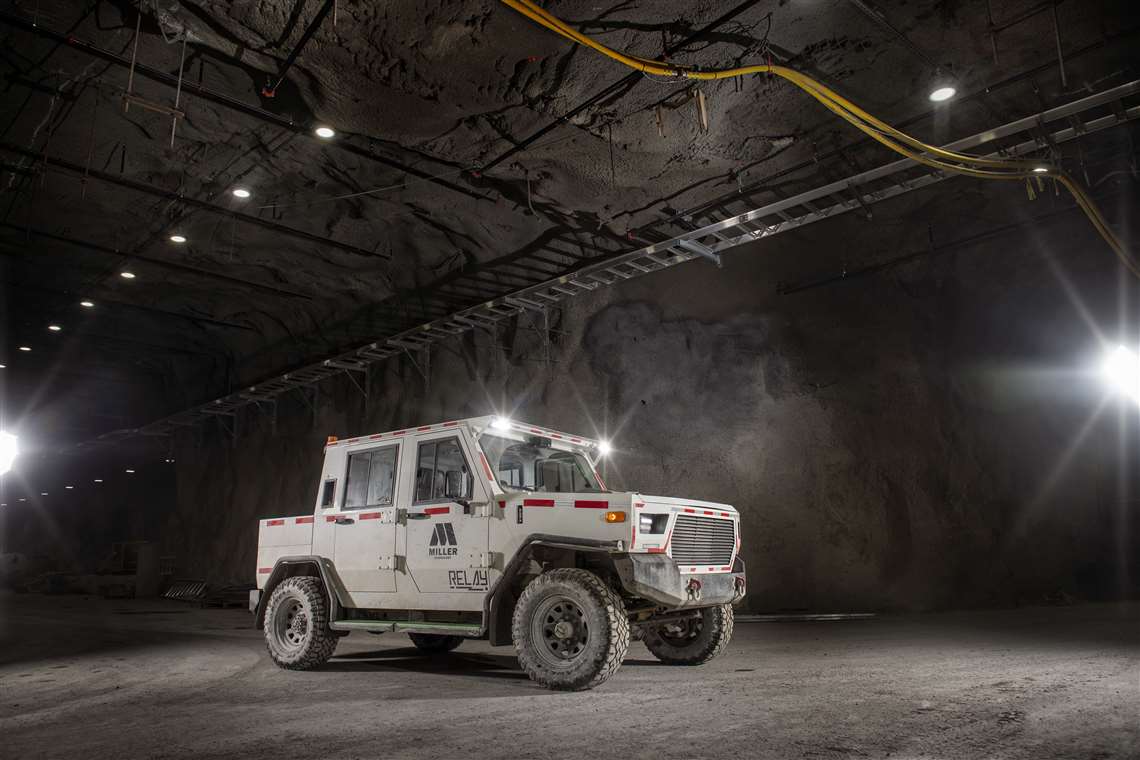 It’s been said that miners are conservative when it comes to trying new technology, but in actuality many are early adopters – especially when it comes to energy sources that fit their operation’s targets for safety and environmental standards, production levels and capital expenditures. Over the past decade, electric mining vehicles running lithium-ion batteries have advanced from a trade show curiosity to a viable solution for many operations. Some have used the technology to set carbon-free goals, but companies say the advantages to using a lithium-ion battery electric vehicle go even deeper – particularly in underground hard rock mines.

“Mining has really throttled up for us, especially within the last two years,” said Mark Chema, global director of Sales for lithium-ion battery specialist XALT Energy, Midland, Mich. “The mines are probing away at the technology and looking at ways to make the change because they know it’s becoming more feasible and more acceptable. The customers that used to be running one or two demo vehicles are now starting to give serial orders of 50 or more vehicles. That’s very good volume for mining.”

XALT works in all aspects of battery system production from cell research, design and manufacturing to pack design and

final assembly, at its locations in Pontiac and Midland, Mich. The markets it reaches are separated into three segments: transportation (such as truck and transit buses), rail and marine, and specialty markets — the latter is where the mining business sits. Last year, the company reported that it had tripled its production of lithium-ion battery systems.

“The big enabler in mining is ventilation,” said Chema. “The easy ore, from zero to two miles down, has been extracted. Now the mines are going after much deeper ore bodies and it’s extremely expensive to get the ventilation rates down there to remove exhaust gases. That’s placed a spotlight on lithium-ion battery technology, and the fact that the cost is coming down makes for a perfect scenario.”

One of XALT Energy’s customers is mine utility equipment manufacturer Miller Technology. The company said it will soon ship production versions of its purpose-built battery-electric Miller Relay it truck introduced last year. Using the same scalable Ionic Drive system used in the truck, the company also offers electric conversions of the Toyota Landcruiser, a popular utility vehicle in underground mines, and is developing a low-profile electric motor grader.

“In the beginning you could tell which mines were the early adopters because they were already educated about what was available for mining and the some of the dos and don’ts,” said McDermid. “Within five years the market has really evolved, and we’re no longer at the proof-of-concept stage. The customers we see now are well-educated on the product and they’re asking some high-level questions.”

Many mines – both existing and greenfield sites – have added or plan to add lithium-ion battery electric vehicles to their fleets. Consider:

“Some mines that have an existing infrastructure are doing a phased approach to electrification because they’re not going to change the entire mine layout,” said Mike Mayhew, owner of Mayhew Performance, Sudbury, Ontario, Canada.

Today at Macassa Mine, “anything above the 3400 ft. level is mostly all diesel equipment with the exception of a couple pieces, and below the 4900 level 90% of their equipment is battery electric vehicles – and 80% of the overall production comes from battery electrics,” Mayhew said. “They depend on those machines.”

equipment program. Mike Mayhew has worked closely with Kirkland Lake for years, including as mine superintendent for Macassa Mine. He has also worked with battery-electric loader and truck OEM Artisan Vehicles (now part of Sandvik).

“There are a lot of aspects to adding battery-electric vehicles to an existing mine. It’s not plug-and-play,” said Mayhew. “There is the charging infrastructure, maintenance and training that must also be taken into consideration. The machines can also impact mine design, for example, to take advantage of battery regeneration going down a ramp.”

The benefits of going electric can be found in the ventilation rates, as well as in an improved operator environment on the machine itself because there is less heat, noise and vibration. “They also create less airborne dust in an underground mine,” said Mayhew, “because you don’t have the exhaust bouncing off the floor.”

Battery regeneration is another factor. “In mining applications, batteries can be almost fully recharged when going downhill, and they can use the power from the battery when going uphill,” said Matt Damasceno, application engineering and key account manager, XALT Energy. “We are seeing a 95% or better energy efficiency with our lithium-ion batteries.”

Surface mines have generally lagged when it comes to electrification, but that could be changing in Quebec, Canada. About 100 miles north of Montréal, Nouveau Monde Graphite is developing a mine with a projected concentrate production of 100,000 tonnes per year of battery-grade graphite over a 26-year period. The mining company has said its Matawinie graphite project will be the first of its kind to operate as an all-electric, low-carbon mine.

“By weight, graphite is the largest percentage of content in a lithium-ion battery,” said David Francis Lyon, director of Electrification & Automation for Nouveau Monde Graphite and founder and principal of 6Synct Consulting Inc., Midland, Ontario, Canada. “That’s the marketplace we’re in and we want to participate in the full cycle.”

With the Matawinie greenfield project, the mining firm can develop a low-carbon fleet from the start. “The electricity infrastructure available is hydro-electric and it has the capacity, so Nouveau Monde can determine what the fleet will look like based on readily available power,” said Lyon. “Our most recent industry review is allowing us to set the puzzle pieces in place. The mine is to be in operation by 2023, and our mandate is to go all electric with a total equipment roll out over five years. I think that timeline is very achievable based on what’s coming out in the marketplace.”

Before starting 6Synct, Lyon worked as a mechanical engineer and business development manager for an engineering services company that has developed an electric powertrain popular with underground mine utility equipment.

“My focus now is to support end-users in the adoption of new electric products through a data-led approach,” said Lyon. “The mines are looking to start their path to electrification and commercial technology exists that will return a decent ROI. They just need the right information and strategy to make the first big step.”

6Synct also supports component suppliers, including, for example, battery manufacturers that want to adapt their products to mining.

“There is a lot of technology coming into play for batteries to help increase their performance or deal with parasitic loads, such as hydraulic systems. A lot of work has centered on battery conditioning, such as heating and cooling the cells. I’m interested in technologies that address the root cause of a problem – if a battery has a performance limitation due to temperature, can we find a battery that doesn’t? It’s an engineering exercise to keep a battery cool, but that can add complication to the final product.”

Miller Technology showed its battery-electric Relay utility vehicle at the Bauma construction and mining equipment trade show in Germany in April 2019. The machine has evolved a bit since then, but the company said it has left its Ionic Drive system alone.

“We’ve done some very successful product testing in the mines,” said Hugh McDermid. “Anyone who has seen it or driven

it has been very impressed and we continue to tweak it here and there, so it’s only getting better. We revised the suspension layout and we’ve incorporated a few systems from a customer perspective, so we have more options to offer, including proximity detection and methane monitoring.”

The drive system is comprised of a midship-mounted liquid cooled TM4 motor rated 100 kW continuous mechanical power output (170 kW peak). The motor be quickly swapped through an access panel in the floorboard.

“That was a big push from our design team,” said McDermid. “Our designers in-house have a very good grasp on the fact these vehicles need to be easily repaired. Making sure the Relay was serviceable was a big consideration to make the job a little bit more enjoyable for whoever works on it.”

Written by Chad Elmore, this article originally appeared in the July 2020 issue of Diesel Progress.