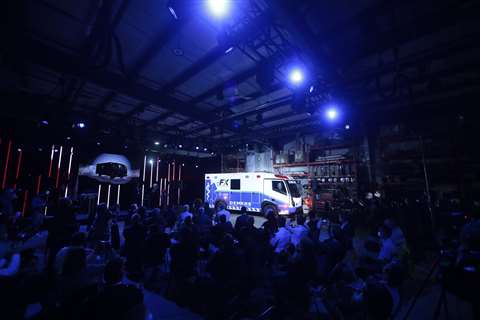 The ambulance, scheduled to be commercialized in the second half of 2022, is the result of nearly five years of collaborative work carried out by Demers Ambulances and Lion, which involved direct input from paramedic technicians and emergency medical service companies.

“This is a great day for Demers Ambulances. Together with our employees, colleagues, partners, and elected officials who support this project that has become a reality, we unveil our 100% electric ambulance, marking the most important evolution of ambulance transport since the first generation of Demers ambulances 60 years ago,” said Alain Brunelle, CEO, Demers Ambulances. “Combining innovation and performance, the 100% electric ambulance is the result of an exceptional collaboration with paramedics and we are particularly proud to see this new vehicle generate so much enthusiasm and excitement from the community. I would like to salute the leadership and genius of the Lion team and thank the Government of Quebec and NRC IRAP for their support from day one of this ambitious project.” 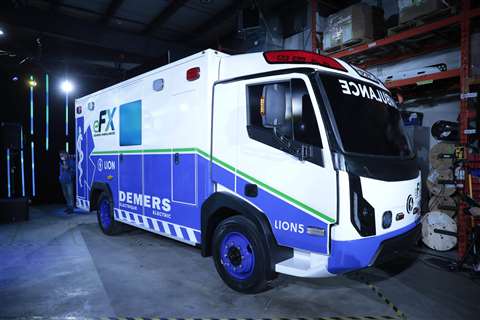 The ambulance was developed with the support of the government of Quebec, Canada, and the National Research Council of Canada Industrial Research Assistance Program (NRC IRAP).

“The realization of this 100% electric ambulance highlights Quebec’s expertise in the design of electric vehicles and its leadership in the electrification of transportation. This fine example of industrial collaboration between two Quebec companies, Demers Ambulances and Lion Electric, will certainly be a success on a North American and even international scale,” said Pierre Fitzgibbon, minister of Economy and Innovation and minister responsible for Regional Economic Development.

The Lion5 chassis of the Demers eFX Ambulance will be assembled in Saint-Jérôme, Quebec, Canada, by Lion, while the medical compartment and final assembly will be carried out by Demers Ambulances in Beloeil, Quebec.

The all-electric ambulance is expected to be sold throughout North America, and eventually worldwide, as ambulances sold by Demers and its affiliated brands are already in service in 43 countries. This exclusive mutual agreement between Lion and Demers contemplates the deployment of at least 1500 100% electric ambulances over the next five years by Demers Ambulances.

Demers aid the purpose-built electric ambulance will also make it possible to achieve significant gains in the ergonomics, safety and efficiency of paramedics, in addition to improving their overall comfort and that of their patients.

The ambulance will be equipped with a chassis that was developed for use as an ambulance. The research and development teams of Demers Ambulances and Lion reportedly redesigned the work space of the two sections of the vehicle and rethought the ergonomics and layout of the ambulance.

Some of the main challenges that paramedic technicians frequently face is the ability to maneuver freely while the ambulance is in motion to provide care to the patient while sitting with a seatbelt fastened. Demers Ambulance said its research and development team, supported by numerous paramedics consulted throughout this process, has developed many innovative features which will be unveiled prior to certification and start of vehicle production.