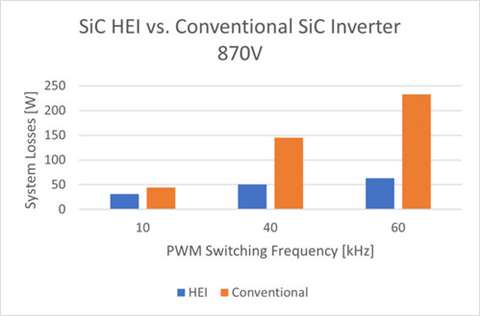 The data is said to confirm the ability to eliminate switching losses and increase switching frequencies without increasing temperature.

The company’s SiC HEI is a 10 kW/800 volt inverter based on silicon carbide semi-conductors. 800 volts was selected as the level to match designs now being adopted for most recent EV powertrain configurations.

The resulting temperature increase from using the SiC HEI converter is ‘significantly lower’ than current invertor technologies. This could result in significant design and performance improvements for future electric vehicle powertrains.

The SiC HEI invertor is stated as having the ability to significantly increase power density, while also reducing cost, size and weight.

Ari Berger, Hillcrest CTO, said: “We are thrilled to share the results we’ve achieved thus far with the SiC HEI and continue to work with our development partners at Systematec to further improve and optimize with a specific focus not just on eliminating switching losses, but further reducing total system losses in our SiC HEI inverter.”

A benchmark test compared the performance of the SiC HEI PoC to a conventional SiC inverter. The parameters for these tests ranged from 470 to 870 volts, with frequencies from 10 kHz to 60 kHz at each voltage level. In each case, the SiC HEI PoC successfully demonstrated its ability to eliminate switching losses and increase switching frequencies without increasing the SiC temperatures under continuous operation.