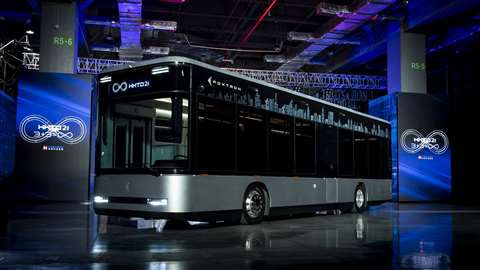 The three vehicles are the Model C recreational vehicle, the Model E saloon and the Model T electric bus.

Along with Terry Gou, founder of Hon Hai, the vehicle unveiling was also attended by Lilian Chen, CEO of Yulon Motor Group. The vehicles will be produced by Foxtron, a joint-venture partnership between the two companies.

The Model C is the first model to use Hon Hai’s modular MIH EV platform which positions the battery pack in the floor of the vehicle. With a minimal 0.27 drag coefficient the vehicle is reported have a maximum range of 700 km. The Model E has a similar range but is marginally quicker; producing an equivalent 750 hp the saloon can reach 100 km/h in 2.8 seconds.

Featuring a rigid body design, the Model T bus has already undergone 200,000 km of endurance tests. The battery pack is reported capable of withstanding temperatures of up to 400oC.

It has been reported that Foxtron is working in cooperation with Giga Solar Materials, Long Time Technology and China Steel Chemical to produce next-gen anodes used in lithium-ion phosphate batteries. The companies will respectively deliver silicon oxide, artificial graphite and mesocarbon microbeads for the project.

The company reports that it has also setup strategic partnerships to access the required vehicle technologies and production network expertise. This includes a possible deal with powertrain component supplier Nidec.