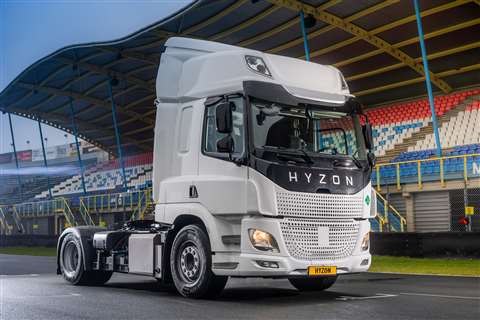 Hyzon FCEV will have waste collection bodies supplied by Geesinknorba

Hyzon specialises in the production of zero-emission, hydrogen fuel cell electric vehicles (FCEVs). Geesinknorba will act as a Tier 1 supplier and exclusive vendor of the vehicles.

About 300 vehicles are expected to be supplied over the three-year contract. The companies are forecasting increased demand as customers look to decarbonise their waste collection businesses.

With headquarters in Rochester, New York, Hyzon operates a series of assembly facilities around the world. Geesinknorba operates more than 7500 refuse collection vehicles across Europe and are described as the largest provider of waste collection FCEVs.

The vehicles covered by the contract will be produced at the Hyzon plant in Groningen and the Geesinknorba facility in Emmeloord, both in the Netherlands. Geesinknorba will supply the refuse collection bodies, compaction mechanisms and lifters, which will be applied to Hyzon vehicle platforms.

The first vehicles are expected to be deployed in Barcelona, Spain.

Both companies are also collaborating on delivery of maintenance and service contracts to support the switch to FCEVs in waste collection.