The Memorandum of Understanding with California-based Infinium builds on MHI’s 2021 investment in Infinium and will focus on exploring the deployment of Infinium’s proprietary Electrofuels technology in the Japanese market.

According to Infinium, Electrofuels are classified as ultra-low carbon fuels because they reduce carbon dioxide emissions by up to 97% when compared to traditional jet and diesel fuels. They are designed to be a drop-in replacement for fossil-based fuels and can be used in airplanes, trucks and ships without the need for costly engine modifications.

By combining Infinium Electrofuels production technology with MHI Group’s CO2 capture technology and value chain solutions, MHI aims to accelerate the realization of a carbon-neutral society in Japan, alongside its existing strategies such as EV oriented transportation, CO2 recovery and carbon offsets.

“We’re proud to collaborate with Infinium to combine their proprietary technology with our expertise in the industry,” said Makoto Susaki, head of CCUS Business Taskforce. “Together, we can accelerate deployment of these key solutions throughout Japan and around the world in order to achieve our common goal of decarbonization.”

According to Infinium, many industrial processes result in the discharge of carbon dioxide (CO2) waste as part of their production. Infinium utilizes that CO2 waste and introduces hydrogen to the mix in a unique process. Together, they are converted to synthetic gas using Infinium’s proprietary, patented CO2Cat catalyst.

The synthetic gas is fed through a second reactor and proprietary production step to convert synthesis gas directly into liquid fuels. 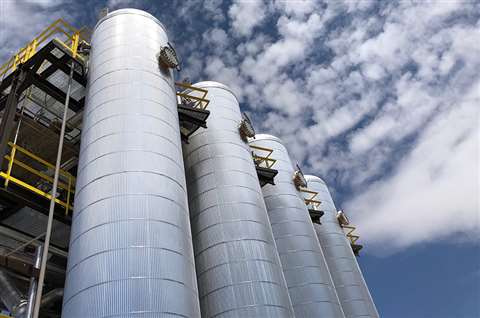 Mitsubishi Heavy Industries signed a Memorandum of Understanding with Infinium to accelerate decarbonization solutions in Japan. The companies announced plans to collaborate on the deployment of proprietary Infinium Electrofuels in the Japanese market. (Image: MHI)

This collaboration also supports the Japanese government’s Green Growth Strategy, which aims to reduce greenhouse gas emissions by 46% by 2030 (from 2013 levels) and achieve carbon neutrality by 2050. The use of carbon-neutral fuels is expected to play a key role in decarbonizing industries where this is typically challenging such as long-distance transportation, air transportation, and marine transportation, where electric vehicles are considered difficult to utilize at scale.

“The Infinium team is tremendously excited about this opportunity to bring clean fuels to the Japanese market alongside our colleagues at MHI,” said Infinium CEO Robert Schuetzle. “We’re on a mission to decarbonize the world, and the opportunity to build Electrofuels™ production in yet another pivotal geographic market further validates the growing commitment to a net-zero carbon future.”