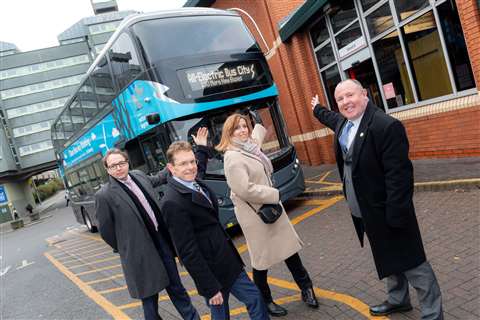 Transport for West Midlands (TfWM) secured £50 million in funding from the UK government’s Department of Transport to support the deal. The new buses are scheduled to enter service in 2023.

Based on similar agreements with other bus companies, up to 300 battery-electric buses could be operating in Coventry by 2025.

Coventry already has 10 battery-electric buses in service, funded by a £2.2 million from the government’s Low Emission Bus Scheme. They are partially charged using solar panels already installed at Pool Meadow.

It is reported that the buses can charge in four hours and have a range of 220 km in the winter and up to 280 km in the summer.

Speaking about the deal, David Bradford, MD of National Express Bus, said the 10 battery-electric buses operated by the company had already driven more than 850,000 miles, cutting 1,400 tonnes of CO2 emissions.

Drivers of the new buses are trained to get the best out of the powertrain, preserving the charge for as long as possible.