Navistar Supplies the chicken AND the egg 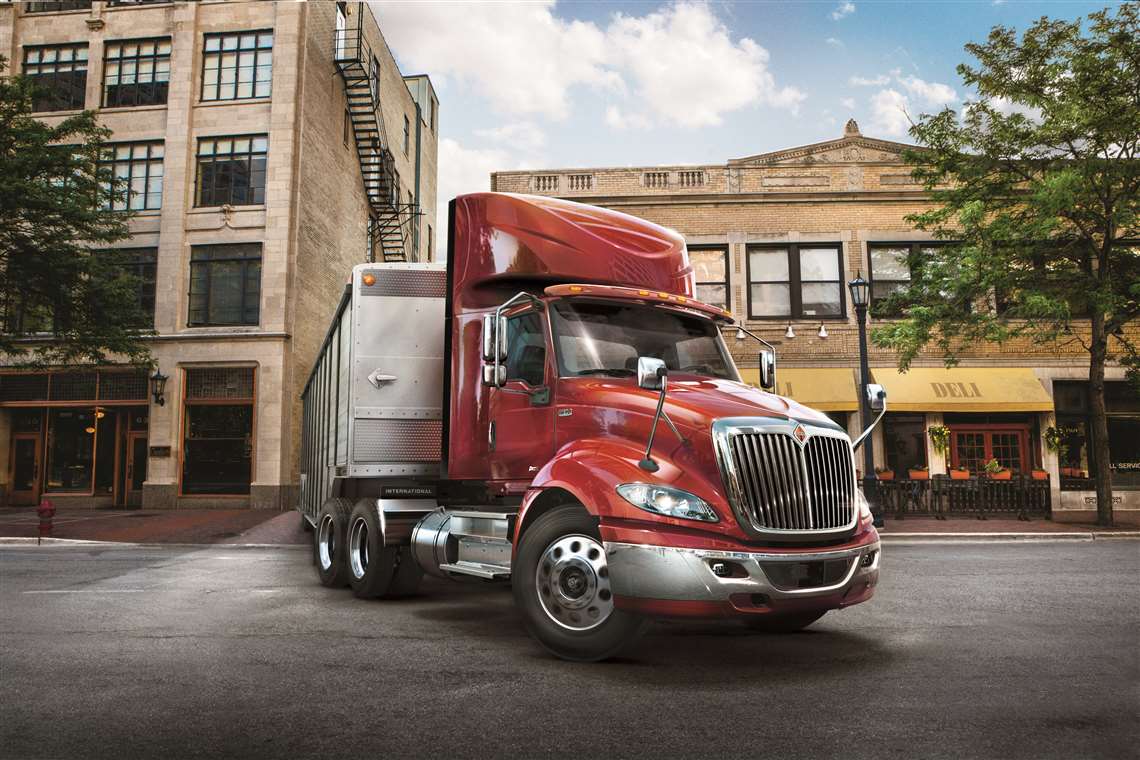 Navistar announced a new program in which its RH model Class 8 truck will be offered as fuel cell electric vehicles, with the truck and a hydrogen fuel system infrastructure from OneH2 to be piloted by fleet operator J.B. Hunt.

One of greatest challenges to achieving the hydrogen economy generally anticipated to be the future of mobility, comes down to a chicken-and-egg situation.

Despite the regulatory drivers, everyone understands it will be difficult to justify the purchase of any vehicle powered by hydrogen until there is a sufficient fueling infrastructure. And it’s hard to envision anyone investing in a large hydrogen infrastructure without the promise that a sufficient number of hydrogen vehicles will need refueling.

Navistar recently showed how it is trying to address that “what comes first?” scenario. The Illinois-based truck maker, along with General Motors, hydrogen fuel system supplier OneH2 and fleet operator J.B. Hunt Transport, is cooperating on what Navistar is calling a “hydrogen truck ecosystem” intended to provide “a complete solution for zero-emissions long-haul transportation.”

“We’ve been internally discussing with our technical partners for a long time, the challenges of fuel cell vehicles,” said Persio Lisboa, Navistar’s president and CEO. “And the main challenges really go beyond the technology, although the technology is key and essential for us to be able to perform with a tractor that can go in a long haul.

“As you are seeing everywhere in the world, the infrastructure for hydrogen is one of the most challenging goals.” Persio Lisboa, president & CEO, Navistar

“But that wouldn’t be possible without the infrastructure. As you are seeing everywhere in the world, the infrastructure for hydrogen is one of the most challenging goals. Because once you have the infrastructure, then you are enabling the technology. After really pursuing all these opportunities and investigating all the alternatives, we basically are coming up with a model that we believe can be highly successful, which is this decentralized way of distributing hydrogen at an affordable cost. And that would enable a longer range for vehicles operating in long haul.

“So that’s why we wanted to do this not only with a vehicle, we didn’t want to talk about the infrastructure only and we couldn’t do it without a customer. That’s why what we are providing to the world is a solution that hopefully is going to gain scale enough that it will enable the infrastructure nationwide of hydrogen that we want to see.”

The trucks will incorporate GM’s Hydrotec fuel cell system and OneH2 will supply its hydrogen fueling solution, which includes hydrogen production, storage and delivery. The truck and fueling technology will be piloted by J.B. Hunt Transport, which is a division of J.B. Hunt Transportation, one of the largest fleet operators in North America.

The Navistar fuel cell trucks will be driven by a pair of GM’s Hydrotec fuel cell systems. Packaged into a “power cube” containing more than 300 hydrogen fuel cells and thermal and power management systems, each cube delivers 80 kW.

“Hydrogen fuel cells offer great promise for heavy-duty trucks in applications requiring a higher density of energy, fast refueling and additional range,” Lisboa said. “We are excited to provide customers with added flexibility through a new hydrogen truck ecosystem that combines our vehicles with the hydrogen fuel cell technology of General Motors and the modular, mobile and scalable hydrogen production and fueling capabilities of OneH2. And we are very pleased that our valued customer J.B. Hunt has committed to utilize the solution on dedicated routes and to share key learnings.

“This invaluable relationship will allow for key learnings to be shared in the development of a zero-emissions business model that reduces carbon footprint in a meaningful and affordable way. We also believe that this model generates the initial supporting infrastructure for hydrogen distribution that is required to accelerate the adoption of fuel cell technology in commercial vehicles – an important step to enable a nationwide distribution network in the future.”

It is interesting that Navistar chose GM as its fuel cell supplier, particularly in light of the fact that its major engine supplier, Cummins, also manufactures fuel cells and has demonstrated them in its own Class 8 demonstrator vehicles. But Lisboa said that following a strategy of “collaboration without boundaries,” the company chose GM, “a trusted partner on the industrial side.”

“After extensive research,” Lisboa added, “Navistar selected GM to collaborate on fuel cell technology due to the company’s global leadership in the space. The company’s 15 years of hydrogen fuel cell development, 3.2 million real world miles powered by hydrogen and commitment to a vision of a zero emissions future is key to powering Navistar’s fuel cell electric international RH series vehicle.”

The Hydrotec fuel cells are packaged in modules GM calls “power cubes” and the RH trucks will incorporate two such cubes, each containing more than 300 hydrogen fuel cells, along with thermal and power management systems. Each power cube delivers 80 kW and utilize proprietary controls designed to increase fuel cell and battery life and performance while optimizing cold-start performance.

Charlie Freese, executive director of GM’s global fuel cell business, said the system incorporates “a fuel cell stack with the balance of plant mounted, all the things that move the coolant and inject the hydrogen and so forth.

“The power cube then integrates some other parts to bring into kind of a standardized building block that you can then put one, two or three into a vehicle with a standardized interface that has power electronics and other things integrated into the control architecture.”

Along with Hydrotec power cubes, the electric powertrain will incorporate lithium batteries, hydrogen storage tanks and electric motor drives. Navistar is not revealing the exact configuration of the powertrain, but it is likely to share some aspects with the eMV battery-electric medium-duty truck that Navistar unveiled in prototype in late 2019. Navistar did confirm that the hydrogen storage tanks will be mounted behind the vehicle cab, similar to a natural gas-powered vehicle. GM said its Hydrotec power cubes, which measure 48.15 in. long, 31.18 in. wide and 22.2 in. high, can be packaged in various places around a vehicle, including under a flat floor. 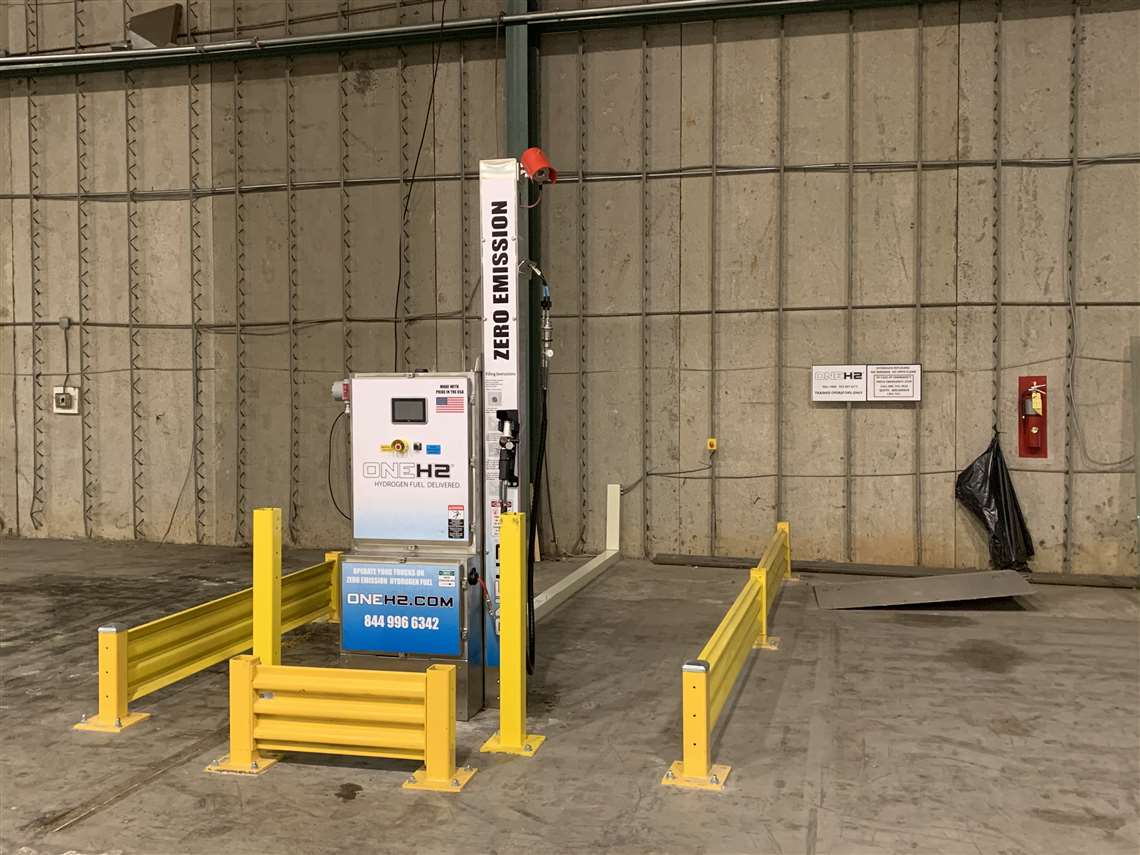 A OneH2 hydrogen fuel dispenser. The company, which specializes in providing hydrogen infrastructure for refueling as well as the hydrogen fuel itself, will provide fueling systems for J.B. Hunt, which will begin piloting the Navistar FCEVs next year.

“As far as for the mass between the different powertrain types, we can say that it’ll be more than a diesel but it will be less than a full battery electric,” said Gary Horvat, vice president, eMobility at Navistar. “As we’re working through the final development, it’s somewhere in between.”

Navistar said the vehicle has a target range of more than 500 miles and a hydrogen fueling time of less than 15 minutes.

Under its partnership agreement with Navistar, OneH2 will supply its hydrogen fueling solution, which includes hydrogen production, storage, delivery and safety. Navistar recently took a minority ownership stake in OneH2, along with Sumitomo Corp. of America and several others.

“We are excited to partner with OneH2 to supply its modular, mobile and scalable hydrogen fueling solution,” said Lisboa. “OneH2 presents a hydrogen production, storage, delivery and safety solution at an affordable price, and its system is seeing great success at warehouses to power forklifts.”

Through its affiliates, OneH2 plans to kickstart substantial hydrogen heavy truck refueling infrastructure by incorporating more than 2000 International RH Series FCEVs into existing truck fleets in the near term.

“We’re excited about the opportunity to partner with Navistar,” said Paul Dawson, OneH2 president and CEO. “We believe strongly that hydrogen fuel is the future of zero- emission renewable energy in the heavy truck market and are pleased that this agreement will provide additional scope for its application. Under this agreement, we will be able to offer fleets a zero-emission truck with total cost of operation lower than diesel in key segments of the industry.”

Headquartered in Longview, N.C., OneH2 specializes in providing both mobile and fixed hydrogen infrastructure for truck refueling, as well as the hydrogen fuel itself. In 2019, the company was selected to supply hydrogen for fuel cell electric truck fleets at the ports of Los Angeles and San Diego.

“We have invested heavily in miniaturized methane reforming,” said Dawson. “So we can essentially produce hydrogen in modularized form for use at distribution centers or at service centers. We don’t necessarily need to build a mega-scale plant and haul it for the customer to use.

Dawson said that OneH2’s hydrogen fueling technology could be sized to the size of the fleet being fueled. “With small scale operations in the single digits of trucks out of a distribution center, it’s fairly easy to deliver hydrogen using our platform as a warehousing solution,” he said. “Basically, you can deliver a trailer of hydrogen for truck refueling at a distribution center or logistics center that can cater to a handful of trucks easily. We do that today, in the industrial equipment market.

“Once you start to scale up to tens of trucks, the approach is to put a small-scale hydrogen production unit at the distribution center or the factory or even a truck service center and refuel at that module. You’re basically producing hydrogen fuel on demand to refuel the truck.”

That model works well for J.B. Hunt, according to Chief Operating Officer Nick Hobbs. “We have a lot of opportunity because we’re based onsite with our customers,” he said. “And so if we can base anywhere from five trucks to 200 trucks at a location, the scalability to design is very flexible and that works out very well for us.

“And it’s very fast on the refueling – slip-seat operations – and so we have a lot of flexibility with that.”

This story first appeared in the March issue of Diesel Progress. For a free print or digital subscription, click here,