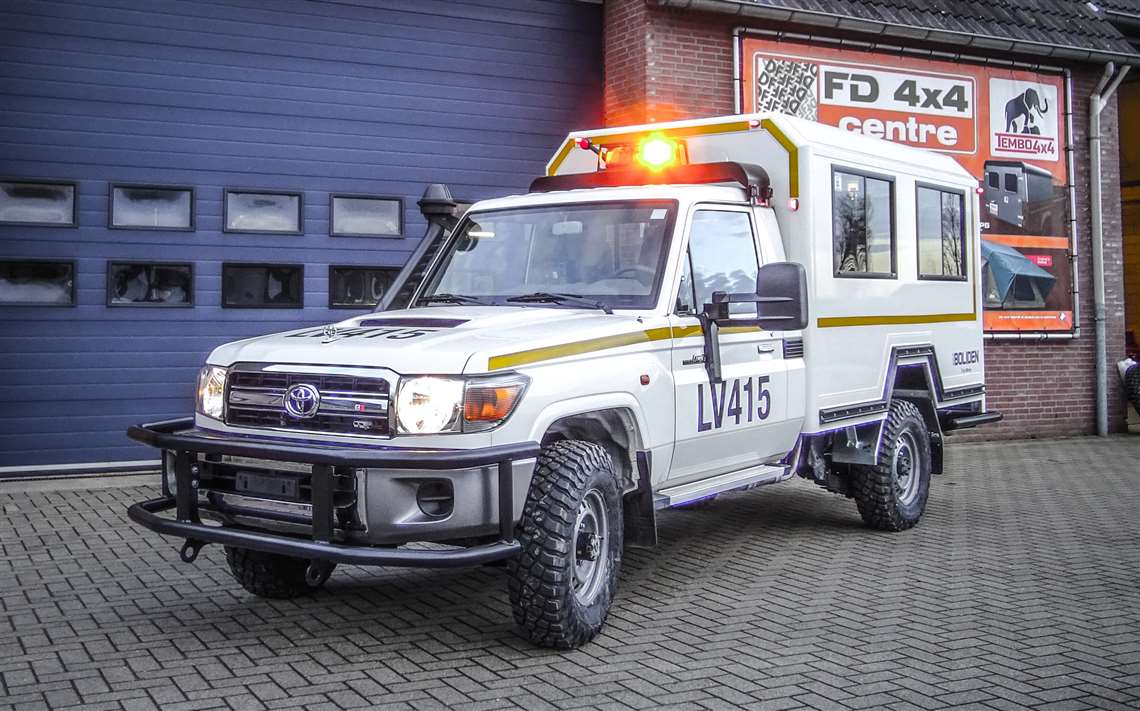 Designers have turned the battery-electric Tembo 4×4 e-LV mine utility vehicle into a mantrip with the addition of a new 10-person carrier. Made in the Netherlands, the Toyota-based trucks are distributed by mining and construction equipment manufacturer GHH Fahrzeuge GmbH.

In addition, there are a variety of conversion kits available to suit customer needs as well as tailor-made options. The kits include mechanical and electrical service vehicles based on the Tembo flatbed platform.

Based in Bergeijk, The Netherlands, Tembo is a battery-electric and off-road vehicle company with global sales and distribution channels on four continents. It services mining, infrastructure and utilities as well as government services, game safaris and humanitarian aid with customized light electric vehicles.

While the company said Tembo is focused on “going green” and being a leader in 100% electric vehicles, the need for conventional diesel units is understood and can also be supported.

In order to make a Toyota into a battery-electric mine utility vehicle, the company removes the original Land Cruiser or Hilux engine, transmission and transfer box and replaces it with an electric motor rated 65 kW and 250 Nm torque fitted on a Tembo 4×4 1:3 reduction gearbox in combination with a Toyota full-time 4×4 transfer case.

A specially designed lithium-ion graphite/NMC (G-NMC) battery is of a modular layout, controlled by a BMS (Battery Management System) and is liquid-cooled and can be heated for below-freezing conditions. For better weight distribution the battery pack is divided in two packs with one fitted in the front engine compartment and one in the rear in place of the diesel fuel tank.

The company said the vehicle can achieve 80 km/h with a 28 kwh battery pack and 200 km with a 72 kWh battery pack. In two and a half hours the vehicle’s battery can be charged from 20 to 80% with a single phase charger, and with a three-phase charger the company said it will require one hour. A 15 kW charger is also on board with the single-phase and a 22 kW with the three-phase.

Tembo also has distributors in other countries, including Canada.

In October, VivoPower International PLC signed a definitive agreement to acquire 51% of Tembo 4×4 e-LV B.V for U.S. $4.7 million, and VivoPower retained the option to acquire the remaining 49% in the future.

Founded in 2014, VivoPower is a battery technology, electric vehicle, solar and critical power services company with operations in Australia, United States, Canada and the United Kingdom.

VivoPower said Tembo generated $2.3 million in revenue for its fiscal year ended Dec. 31, 2019, and that based on its analysis of publicly available industry data, it estimated that the potential global addressable market for commercial fleet electric vehicles could be at least $36 billion within the markets where Tembo is currently active, which did not yet include Asia, South America or the United States.

“We look forward to working even more closely with the Tembo team in scaling up its capacity to deliver customized and/or ruggedized commercial fleet electrification solutions,“ said Kevin Chin, VivoPower executive chairman and CEO. “Furthermore, this acquisition will enable VivoPower to accelerate the roll out of our sustainable energy solutions offering, with an initial focus on the mining, infrastructure and utilities sectors globally.“

At the same time, “VivoPower’s investment will allow Tembo to build additional capacity to meet pent up demand from our customers and improve efficiencies of scale. Given that the Tembo and VivoPower teams have already started working together on customer-initiated requests for proposals, we believe that this will translate into a growing order book,” said Daams.