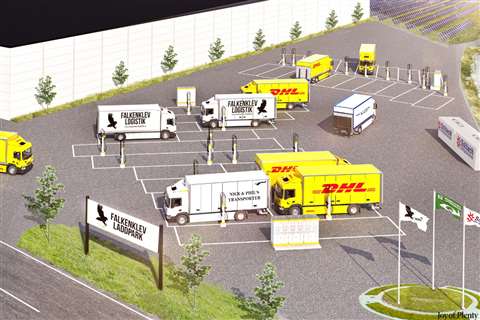 The vehicles and equipment are key elements in creation of the logistics firm’s new 22-vehicle charging hub and solar park in Malmo, Sweden.

The site, which could be expanded to support up to 40 trucks, will be Sweden’s largest single truck charging station when it opens in late 2022.

The five 4x2 BEVs, with vehicle bodies built by SKAB, will be used for goods distribution across southern Sweden. The plan is to make Falkenklev’s fleet 100% electric.

Charging station hardware will also be supplied by Finnish company Kempower and delivered by Scania. The site will use smart technology to deliver energy based on the number of vehicles using the site. Initial maximum charge output will be 250 kW, with potential to upgrade this to 320 kW per vehicle, future-proofing the site for vehicles with larger battery packs and charging requirements.

Soltech Energy Solutions has been commissioned to build a 1.5-hectare solar park, which will use the 2 MW battery storage system.

The site will be available to the public, allowing vehicles from other companies to use the facilities.

Falkenklev Logistik’s CEO, Victor Falkenklev, said: “The charging stations and solar park are an idea I have had for a couple of years. With the need to become more sustainable and the way diesel prices are increasing, it was quite obvious to me that we had to do something and we are committed to electrifying our fleet. The electricity is being generated by solar power, which makes it 100% renewable. It’s a really proud moment for us.”

“Supplying our e-mobility solution for this ambitious project is further evidence of the rapid development of electrification in the heavy transport industry,” said Fredrik Allard, head of Emobility, Scania.