The Tesla Semi Hits The Streets 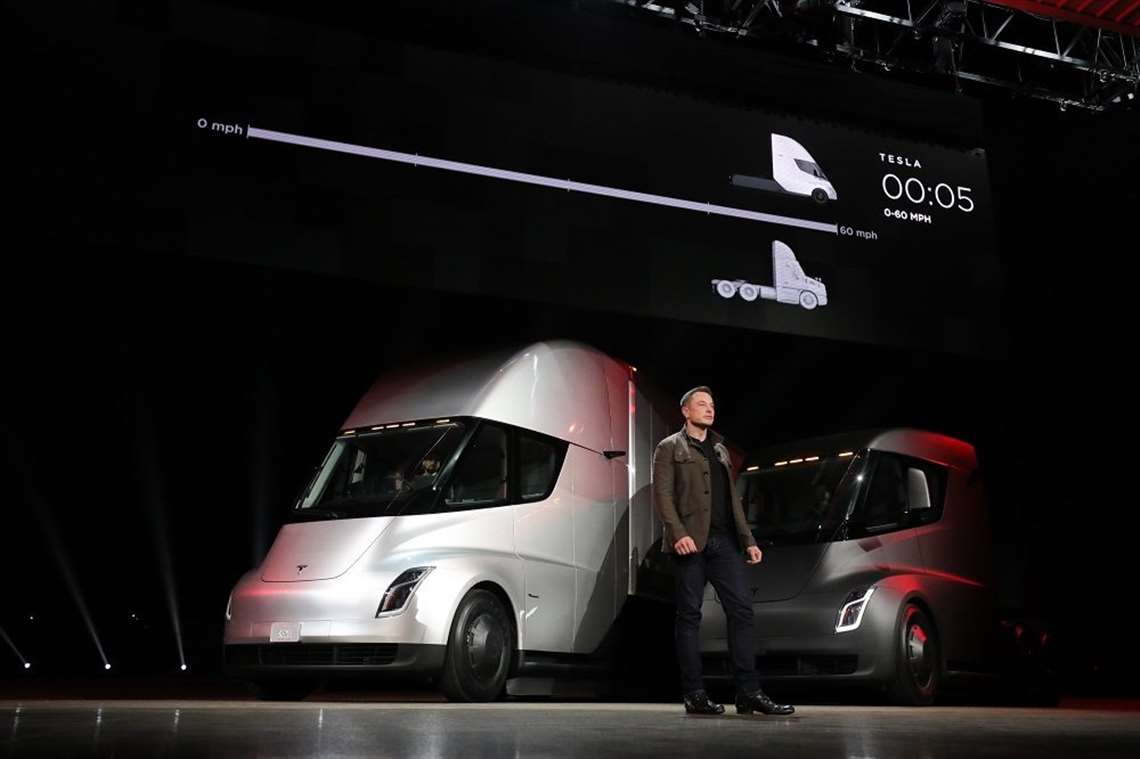 Tesla hit the streets running with its much anticipated “Semi” last night at a reveal party attended by the world’s press, Tesla officials and employees from both the assembly plant in Fremont, Calif., and the Giga Li-Ion battery plant in Nevada. No static launch for CEO and product architect of Tesla, Elon Musk as he stepped down from the cab of the much-heralded truck to highlight its features before a sea of fans.

And it was not just one static prototype on stage, but two models of the vehicle that roared into a hangar at the Jet Center, a private airport adjacent to Los Angeles International Airport in Hawthorne, Calif. To rousing cheers from an audience of around 1200 people, Musk extolled the performance features of the Semi. They include:

Most significantly for the truckers in the audience, a cost per mile of $1.25, comparing favorably to today’s diesel truck cost of $1.51. Musk did not specify the trade cycle or the structure of the financing but did say that Tesla was aiming for zero breakdowns in a million miles of operation.

According to reports, truckload carrier J.B. Hunt is among the first fleet operators to publicly reveal it has reserved the truck, saying it has reserved “multiple Tesla Semis.”

“Reserving Tesla trucks marks an important step in our efforts to implement industry-changing technology,” said John Roberts, president and chief executive officer at J.B. Hunt. “We believe electric trucks will be most beneficial on local and dray routes and we look forward to utilizing this new, sustainable technology.”

Major North American grocery chain Meijer also said it has put down $5000 to reserve four models – though reservations are reported to be $5000 per truck. Production is due in 2019.

In reality the reveal confirmed what the spy and tease photos had already disclosed — a cab forward Class 8 truck with exceptionally smooth lines and promised great aerodynamic performance, a fact highlighted in Musk’s remarks. He said that the 500-mile range was enabled by exceptional aerodynamics, with the vehicle scoring a drag coefficient of 0.36, better even that the Bugatti Chiron’s 0.38.

He also noted the cab side extenders that actively fill the gap between tractor and trailer also contribute to the overall low drag. Worth noting — the tractor at launch looked like a sleeper because of these long, active side extenders.

The trucks will most likely fill a distribution and drayage role, at least in the early stages. The Semi is purely battery-electric. In his presentation Musk said that 80% of truck distribution is less than 500 miles round trip, so the Semi can get out and back on those tasks on a single charge. For longer trips, the batteries can pick up a 400-mile charge in the short half-hour break mandated by U.S. hours of service regulations. And Tesla Fast Chargers are popping up all over the world, wherever Tesla sells a passenger car.

So Tesla Semi trucks can realistically be recharged at shipper and receiver docks. With the electrical distribution infrastructure in place and robust, there’s no need to stop enroute at a truck stop to fuel any more, he implied. And because many of the fast chargers are solar powered, Musk said “anywhere a consumer can charge a Tesla you can charge the truck. Solar powered mega chargers mean the truck is running on sunlight.”

Those sneak preview pictures gave no hint about the driver environment, which is a highlight of the Tesla Semi. A centrally located driver’s seat gives a commanding view behind the enormous curved windshield. The side glass flows smoothly around the A pillars that are surprisingly thin, so the driver’s view forward is excellent. The steering position with a small, car-like wheel on the model at the preview was flanked on either side by flat panel displays from the Model 3 that are customizable as in the Tesla cars.

This not only represents a major advance in driver controls, Tesla said it is actually cheaper to integrate the same flat panel technology it uses in the cars.

The trucks are completely customizable, the company said, and Tesla plans to have truck-specific software to aid in business connectivity for the truck. It also has a full suite of prognostics, maintenance reminders and even can have an electronic data recorder integrated to accommodate the upcoming electronic driver hours recording mandate for the U.S.

The truck is also equipped with the full Tesla accident avoidance technology designed to prevent collisions and keep the truck in-lane. It also includes Tesla’s autonomous driving technology and enables three-truck platooning, said Musk. In such a case, the Semi is not just cost effective against diesel trucks of today, it is also cost effective against the railways.

The trucking and general press had an opportunity for an up-close walk-around a couple of Semis. On one, there was a small passenger seat against the back wall of the day-cab for a riding helper or driver instructor. For anyone who attended the launch of the Nikola One electric prototype last year, there are obvious similarities.

But there are significant differences, too. The 6×4 walk-around truck incorporated a drive tandem, each conventionally air sprung drive axles with a power pack from a Model 3 on the nose of the axle with a motor for each side, totaling four drive motors in all. Musk said that even if two motors failed, the Semi would have performance equal to a diesel truck of today.

The air ride system is conventional Class 8 with regular-looking frame rails. The front axle has independent suspension for good ride. The Tesla guide said the battery pack resides beneath the cab and a conventional fifth wheel allows for trailer coupling. The cab looks like a sleeper from the outside but that’s because the cab sides extend well back from the back of cab.

Access to the cab is to the rear of the driving position through a rear-hinged “suicide” door with three steps tapering in toward the center of the cab. The floor is stepped, presumably to allow for the batteries beneath with a step up to the driving position. The side glass is hinged down its leading edge and opens for ventilation or to pass documents down to gate guards or enforcement officers. The door glass and opposite side fixed glass do not open, removing the need for any lift mechanism that could fail in use. The door and cab sides have generous storage for documents and driver necessities.

Interestingly, the door hinges are hidden and the door handle (from the Model 3) recessed so the sides are super clean. Of the two models on display, one featured conventional mirrors, the other a visibility system with cameras mounted high toward the back of cab. There was a single pantograph-arm windshield wiper to sweep the vast windshield. Musk joked that the glass “can withstand a nuclear explosion or the customer gets a free refund” while emphasizing the point that the truck is optimized for minimum downtime, citing the out-of-service implications of a broken windshield.

Features like these show that the design team understands the needs of the commercial user of the Tesla product. If it delivers the operational savings promised, early customers like Hunt will be delighted. Technicians too, because the electric drivetrain is so much less complicated than the emissions-saddled diesel powertrain.

But drivers? They’ll hate it if they prefer “real” trucks. But millennials — and that’s where the new drivers are to come from — will love them.

Steve Sturgess is an independent trucking writer and consultant based in Irvine, Calif.