Melker Jernberg, President of Volvo Construction Equipment, has said the rental sector has a role to play in the acceleration of industry transformation towards low or zero carbon. 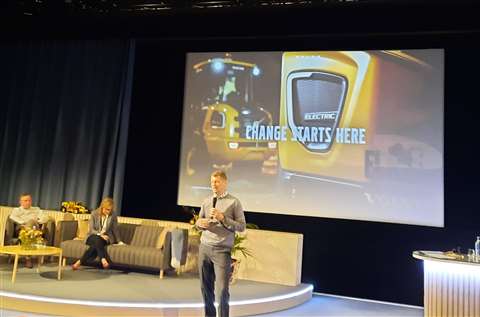 Melker Jernberg, President of Volvo Construction Equipment, addresses the audience at Volvo Days in Sweden on 31 May. (Photo: IRN.)

Jernberg, speaking to IRN at the start of the OEM’s three-week ‘Volvo Days’ event, said rental companies had a role to play in driving project and site efficiencies, and lowering carbon emissions.

The increased focus on optimising utilisation and asset management was being driven by the rental sector, he said; “Often they are able to bring more insight to this than customers.”

Accelerating uptake
During a formal presentation, Jernberg told the audience that since first revealing its plans for an electric machine range prior to Bauma 2019, Volvo CE had reinforced its efforts to accelerate uptake. He said climate change, the pandemic, supply chain issues and the war in Ukraine had underlined the need for accelerated adoption of alternative power sources to fossil fuels.

Recalling the OEM’s move to electrification in 2019; “We underestimated the speed of and need for change”, he said.

Volvo CE’s recent investment in Dutch excavator firm Limach demonstrated its commitment to accelerating the shift to electromobility through initiatives including partnerships, Jernberg told the audience. 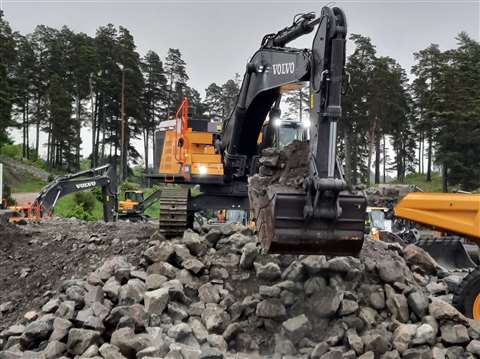 Jernberg said the scope of the project is open-ended, but it is understood Limach will bring alternative power expertise and new ways of thinking to Volvo’s electric machine offering.

Such investments and joint ventures would be key to Volvo CE’s push to step up its development of low emissions equipment, Jernberg said.

“Partnership is the new leadership,” he said.

“This machine, while not yet available to the market, is the next ground-breaking step for Volvo CE as it is the first time the company has electrified a larger excavator as a customer pilot. The EC230E Electric is based on the conventional diesel-powered EC220E, and will deliver the same performance, if not better, with the added benefits of zero emissions, low noise, and low total cost of ownership.”

Volvo CE also announced plans to launch the Volvo Power Unit – a mobile charging unit developed as a collaboration with Volvo CE, Volvo Energy and marine and industrial power solutions specialist Volvo Penta. Announced in May but not yet commercially available, it is being tested in selected markets specifically for recharging of the EC230 Electric. 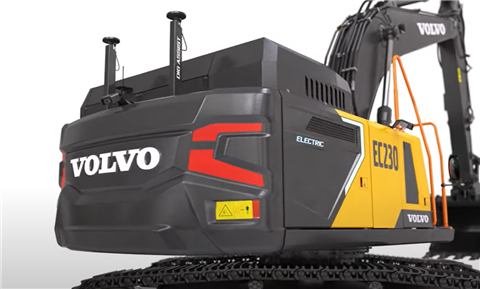 “The rental market will definitely need to be able to provide charging solutions like this for customers,” a Volvo spokesperson told IRN.

Power play
Aside from electrification, power alternatives being researched by Volvo CE range from HVO to hydrogen based fuel cells. In mid-2021 the Cellcentric initiative launched - a joint venture between Volvo Group & Daimler Truck AG to accelerate the development and use of hydrogen-based fuel cells for heavy-duty commercial vehicles and non-automotive applications.

Volvo CE Director Sustainable Power Systems Toni Hagelberg told IRN the company was continuing to focus on a range of power alternatives in addition to electrification. He said the complexities of the current global market necessitated research on a range of options rather than focusing solely on electrification.

Volvo Days is held every three years but was postponed in 2021 due to Covid-19. This year’s edition – based on the theme of Volvo’s ‘Change Starts Here’ campaign - launched with a two day press event on 30 and 31 May at the OEM’s hub in Eskilstuna, Sweden. 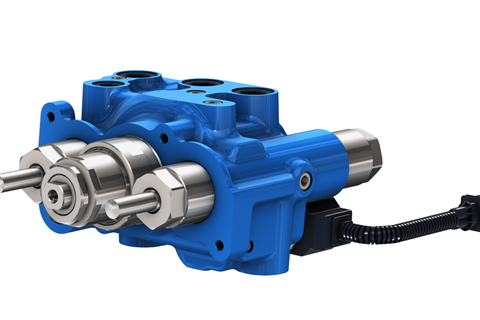