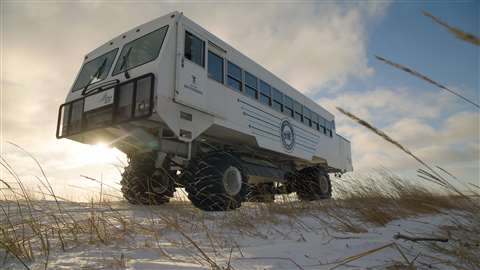 Reality show producers must think every automotive project requires some drama, and it’s usually provided by an unrealistic deadline or an unpredictable cast of characters. John Gunter’s crew had to work through both – although his characters were polar bears – as well as the geographically remote nature of his business and the challenges presented by the job itself, which was converting a purpose-built, diesel-engined, off-road tour bus to a battery-electric powertrain.

Gunter is president and CEO of Frontiers North Adventures, a family-run business that helps guests dine beneath the northern lights, kayak with beluga whales and see wild polar bears in Canada’s subarctic tundra near Churchill, Manitoba. As a Certified B Corp. adventure travel operator, the company has committed to the reduction of greenhouse gas (GHG) emissions and plans to convert its fleet of 12 Tundra Buggies from diesel to electric power by 2030.

Frontiers North had already done a lot of the conversion work on its proof-of-concept machine before it enlisted the help of the Winnipeg, Manitoba, office of JEM Technical in August 2021 – more on that later. There was no time to waste, as the machine had to be in Churchill before the end of November. 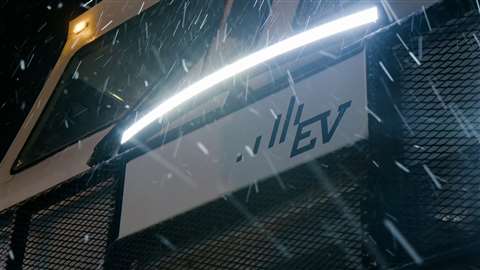 “We really, really, really wanted to get this machine up there and field test it in Churchill amongst wild polar bears,” said Gunter. “The deadline was because these polar bears aggregate near Churchill during October and November waiting for the water on Hudson Bay to freeze. Once it’s iced over, they’re out there wandering on hundreds of thousands of kilometers of sea ice, hunting and eating seals, and then there are no polar bears on land. We gave ourselves that deadline to get the EV Tundra Buggy in front of a polar bear in 2021, for field testing as well as promotional videos and photos. And we did it — with very hard work and grace we got it done.”

Following tests in Winnipeg, the battery-powered “EV Tundra Buggy 12” was placed on a flatbed railcar for the 1000 km ride to Churchill. It was off-loaded on Thursday, Nov. 18, 2021, and by Saturday was giving tours to an invitation-only group. The team also got the marketing material they needed.

While most tourists sign up to watch and photograph the polar bears, foxes, ptarmigan and other animals that call the Churchill Wildlife Management Area home, the Tundra Buggy should also be considered the star of the show.

Frontiers North has a fleet of 12 four-wheel-drive, 40-passenger Tundra Buggies, each powered by a 7.6 L Navistar DT466 diesel engine rated 235 hp that is connected to an Allison Transmission and then through differentials and planetaries on the wheel hubs. Each machine is 13 ft. 10 in. tall – which puts the viewing windows just above the polar bear’s average height of 8 ft. 11 in.

The Tundra Buggy operates on a set of established trails created by the military in the 1950s, allowing tour operators to prevent further damage to the delicate tundra ecosystem. Competitive tour groups based in Churchill use the same routes with similar purpose-built people movers.

“The nature of our business is that we use these vehicles for about 8, maybe 10 hours a day,” said Gunter. “They’re not driven very hard, and they don’t go very far. In Manitoba, we are well served with cost efficient, clean hydro-electricity. EV is a really good solution for us.” 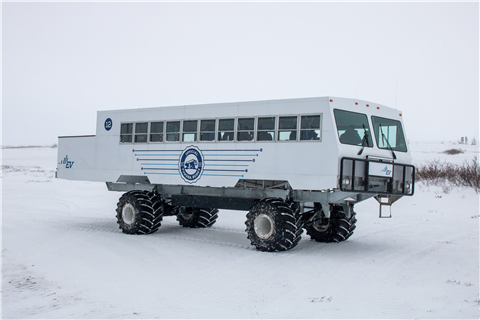 While the battery conversion will help the company achieve its GHG and emissions reduction goals, Gunter said the other benefits are just as valuable.

“We’re able to give our guests a silent tour experience,” said Gunter. “We can be less of a disturbance for wildlife and the big machine can be less of distraction out on the tundra. For us, the whole point of the EV Tundra Buggy is to help these big machines in Churchill fade into the background and be less of a distraction for everybody’s wildlife viewing experience. And that’s not just for our guests, but anybody who is out there.

“Our guests may or may not care about our emissions reduction goals. They may not care that we’re a Certified B Corp. or that we publish a corporate social responsibility report. But what everybody can agree on is that a silent touring experience on the tundra is pretty cool.”

“All of our Tundra Buggies are legacy machines,” said Gunter. “We started building out this fleet in the late ’70s and new Tundra Buggies have been built over time, but back in that day and age it was less sophisticated. The fleet has been constantly updated since then, so today they all look the same from 200 m, but when you get up close, you’ll see they’re very different. We’ve swapped out parts on the old machines to standardize on what we’re using across the fleet. Then in 2015, we embarked on the complete remodel of the passenger compartment.”

Marine-grade windows and doors were installed, and wood salvaged from barns out on the prairie was added to the walls. New bucket-style low-back seats were installed, selected to encourage guests to socialize and ensure unobstructed views.

The EV conversion also provided the opportunity to redesign the undercarriage of each machine. Tundra Buggy 12 was treated to a Dana TM4 propulsion system along with a new frame and suspension.

“The only things that stayed the same are the tires,” said Gunter. “When the new frame was ready, we lifted up the old carriage, pushed out the old diesel undercarriage, and brought in the EV version and dropped the carriage back down. Now we have completely standardized the whole undercarriage, transitioning away from the ‘bucket of bolts’ approach to building and maintaining our Tundra Buggies to a standardized approach with professional design and maintenance.”

To ensure cold temperatures stay outside, the tour company selected a Webasto Thermo Pro 90 coolant heater fueled by a significantly smaller onboard diesel tank than the vehicle carried previously. 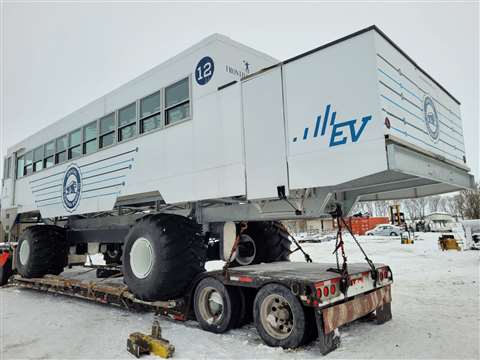 After the conversion was complete and tested in Manitoba, the Tundra Buggy was hauled via truck and rail the 625 miles north to Churchill. (Photo: Frontiers North Adventures)

“We’ve kept the propulsion all-electric and maintained a separate system for cabin heat, which also helped us heat the basement, which is where the batteries are suspended in the bottom of the buggy,” said Gunter. “We also heat potable water and wastewater in the little basement below the lavatory. We wanted to separate propulsion from what’s essentially life support because we didn’t want to be in a situation where guests are out on the tundra without heat.”

After its November debut among the polar bears, EV Tundra Buggy 12 was put into service as the primary transportation for the company’s Northern Lights and Winter Nights tour through March.

“In the six months we’ve been using it,” said Gunter in an interview in April, “it has been an absolute success in terms of our ability to tow heavy loads, our ability to navigate extremely difficult and rugged terrain, our ability to work in extremely cold temperatures – and our ability to exceed the expectations our guests, which I think is a really important one.”

Frontiers North also expects to see a financial benefit from the conversion. “We’ve reduced our diesel consumption from about 120 L a day down to about 7 L a day, which is what we’re running the Webasto heater on. With the recent increase in fuel prices, we project that we’ll be saving about $20,000 a year in fuel per buggy. That is a big expense for us.”

Gunter said they’re ready to service and charge up to four Tundra Buggies before they need to make changes to their electrical infrastructure.

“But we can’t flag the diesel fleet too much, because we still have the other machines that we are using and still need to convert,” said Gunter. “We’re working to convert two more Tundra Buggies from diesel to electric this year and we have an aggressive goal to convert our whole fleet by the end of the decade. During the busy season, however, only a small proportion of our guests will be on the EV Tundra Buggy this year.”

JEM Technical to the rescue

The battery packs installed in EV Tundra Buggy 12 were originally used in one of New Flyer’s first battery-electric buses. When the batteries were decommissioned, the bus manufacturer gifted them to RRC Polytech, which later gave them as an in-kind donation to Frontiers North for the EV project.

Much of the diesel-to-electric conversion was performed by Tye Noble and Richard Hinz, who led the Tundra Buggy 12 project for Frontiers North Adventures, including the battery management system. But with the company’s polar bear-inspired deadline in view, the team ran into electronic control issues that threated to delay the project. Noble called Marv Mathwig, Director of Operations for JEM Technical’s Winnipeg location, to see if he could help.

“I poked around, and we quickly understood how we could support the project and jump in quickly,” said Mathwig. “We had stock on the shelf that would work, and we had time to do the programming on short notice.”

Based in Orono, Minn., JEM Technical is a fluid power system and electronics control solutions integrator for original equipment manufacturers and industrial applications. For many years, the company has designed and manufactured custom valve manifolds and has recently seen significant growth in its electronics control business. 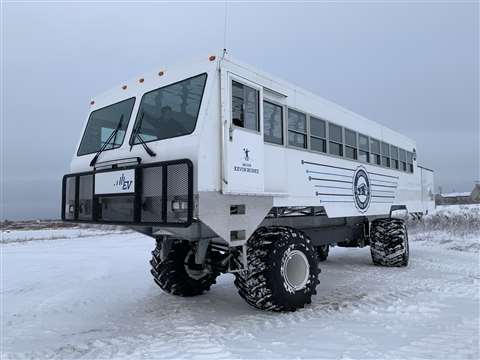 For Frontiers North, it was a significant step forward. “We’re coming from a very basic diesel with no electronics,” said Gunter, “and our dashboards are a bunch of gauges and knobs and dials. Now we have an inset electronic display and what I’ve called the ‘Tundra Buggy operating system.’”

While JEM typically works on production runs of more than a hundred units, the company said it saw the value in working with the college and Frontiers North so it could enhance its expertise with battery management systems and the overall battery-electric system.

“A large part of what JEM contributed was the CAN communication and operator interface to integrate all of the components and get them to talk,” said Andrew DeRung, director of Sales and Marketing, based in JEM Technical’s Minnesota location.

While there are not going to be hundreds of Tundra Buggies roaming the tundra along Hudson Bay, it was by no means a one-off project.

“There was the custom nature of the project,” said Mathwig, “but one thing John flagged early on was that they wanted repeatability. They didn’t want to have a bunch of Tundra Buggies running around with totally custom software and different battery packs. That would be an unmanageable mess in five years. So, we really focused on creating a system that was repeatable.”

When Frontiers North picks a dedicated battery supplier, the battery pack can be lowered from the belly of the buggy and a new one lifted in place. Beyond some programming, Gunter said they should not have to reengineer the chassis.

Gunter and JEM see a strong future in EVs, particularly in converting existing machines to run on batteries. “We think the Tundra Buggy is really the tip of the iceberg as far as these types of applications go,” said DeRung, “and it’s an extension of the work we’re already involved in to help our customers improve their machine technology from a power management and motion control perspective.”

“We think there’s an interesting business opportunity there, even beyond the tours,” said Gunter. “You’re going to get your Ford Lightnings and Teslas, and maybe you’re going to get your electric step trucks, but there are a lot of engine-powered vehicles out there right now. I think a lot of companies that are interested in converting to EV won’t because they just bought a $250,000 truck. It doesn’t make a lot of sense to throw it in the garbage. But in the short term, they can convert what they already have.”