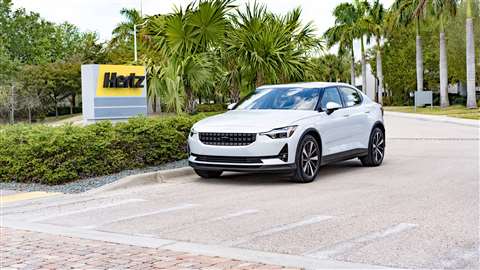 Hertz will offer the Polestar 2 in Europe, the US and Australia Photo: Polestar

It has been reported that Hertz is planning to purchase 65,000 vehicles from EV manufacturer Polestar. While no value was announced, the total could reach $3.2 billion (based on an entry-level vehicle value of $49,000).

This follows on from a report in October 2021 covering the planned purchase by Hertz of 100,000 Tesla vehicles.

The cars will be delivered over the next five years. Hertz will distribute the vehicles across the US, Europe and Australia.

The car rental company has about 500,000 units in its global fleet. Since filing for Chapter 11 bankruptcy in the US, largely due to the COVID pandemic, Hertz has pledged to offer the largest electric rental fleet in North America and one of the largest in the world.

For its part, Polestar sold 29,000 units in 2021. Owned by Volvo Cars, the Polestar name was originally used to denote high-performance Volvo models. Following the decision to launch a premium sub-brand under the same name, in 2018 the Polestar 1 was unveiled at the Geneva motor show. Using a hybrid powertrain, this was effectively a development platform for future pure electric vehicles.

Where Tesla now offers a range of EVs, including the Model S, Model X, Model 3 and Model Y, Polestar has just the one model, Polestar 2. An electric roadster, Polestar O2, is reported to be in development.

In Europe, 2021 was the first year which saw EV sales overtake those of diesel-powered cars. The adoption of EVs by Hertz is intended to give more drivers their first experience of an electric vehicle.

According to a report in the Financial Times, Polestar chief executive Thomas Ingenlath said the agreement with Hertz would “bring the amazing experience of driving an electric car to a wider audience”.

In February this year, Tesla opened its Supercharger network to non-Tesla vehicles in France and Norway as part of a program which could see the full network become available. The Polestar 2 is compatible with the high-speed recharging stations.