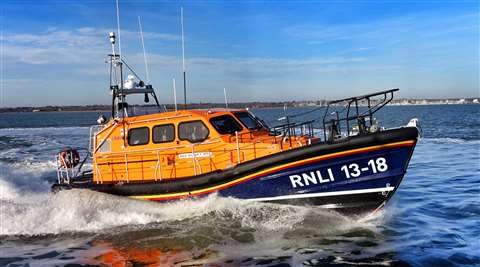 A consortium of companies headed by Mahle Powertrain is investigating the viability of retrofitting vessels with hydrogen-fuel internal combustion engines.

Partners include the Royal National Lifeboat Institution (RNLI), the service which carries out rescues and other patrol activities around the UK coast.

“The current and predicted future state of battery technology alone can’t offer the range and performance required by the RNLI at an acceptable weight for retrofit to its lifeboats,” explained Martin Berger, vice president for Corporate Research and Advanced Engineering at Mahle.

A key element of the 100% hydrogen-fuel engine is Mahle’s HyJet (Hydrogen Jet) ignition system, of which there are two types: active and passive.

In this application, the active system is used. This consists of a small pre-chamber which can be fitted to the cylinder head. Combustion is initiated in this chamber, with the resulting hot gas forced through a small opening into the main combustion chamber where a series of jets uniformly ignite the hot gas and hydrogen fuel mix.

The HyJet project will analyse data collected by the RNLI over real-world operation to establish fleet requirements and to identify the optimum approach for clean power delivery. The tests will also look at onboard fuel storage and refuelling, including the impact on safety standards.

Keeping in mind that marine engines usually have extended service lives, the key to success will be the ability to deliver a virtually zero-emissions solution which will be able to operate over several decades.

With Mahle Powertrain in the lead role, other consortium members include Clean Air Power, providers of the injection system, and the Powertrain Research Centre at the University of Nottingham. Funding has come from the Department for Transport, as part of the Clean Maritime Demonstration Competition.