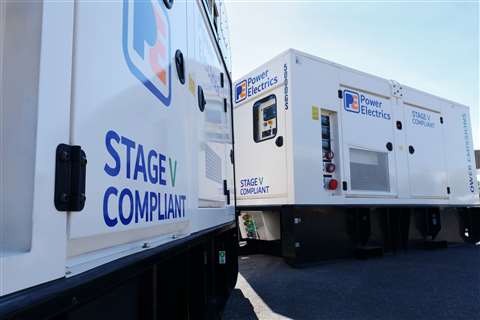 The generators are powered by Green D+, a fuel that is said to reduce carbon emissions. (Photo: Power Electrics)

The UK-based company said that the investment will “transition Power Electrics towards a greener future” with the addition of sets from 20kVA up to 500kVA.

The generators are powered by Green D+, a HVO (Hydrotreated Vegetable Oil) fuel, which is said to reduce carbon emissions, nitrogen oxides and particulates from being released into the atmosphere.

Following the addition of the new equipment, the company will have 3000 Stage V generators units as part of its fleet.

The investment in the generators is part of a wider project by Power Electrics to produce sustainable solutions for its customers. It already offers Ultragen Stage V generators, which are designed to meet EU targets for low-emission Non-Road Mobile Machinery.

Throughout 2022 it has also invested over £8 million (€9.4 million) towards hybrid battery units as it attempts to be “more flexible and adaptive” to its customers’ needs.

In total, the company has added 200 hybrid units to its existing fleet since the start of the year.

Power Electrics’ director, Andy Pullin, said, “We’ve been excited to continue our journey to green, with the process of converting our rental fleet over to Stage V since we introduced our Ultragen range.

“Our team have done some incredible work in producing one of the first Stage V rental generators in the UK.

“We’re looking to provide the most sustainable temporary power package on the market; combining these Stage V generators running on Green D+ with our fleet of hybrid battery units.”