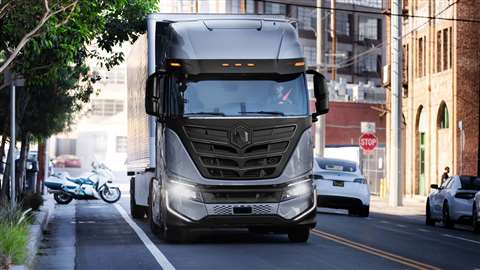 The RHETTA program could drive sales of battery-electric commercial vehicles, including the Nikola Tre

The Electric Power Research Institute (EPRI) and CALSTART have been awarded $13 million (£9.5 million, €11.5 million) from the California Energy Commission to launch what is reported to be the first zero-emission freight charging corridor.

The goal will be to extend the range of battery-electric commercial vehicles, supporting their increased market penetration.

“Electrifying transportation is central to the clean energy transition and this project has tremendous value in the adoption of electric, zero-emission trucks along one of the heaviest travelled corridors in Southern California,” said EPRI president and CEO Arshad Mansoor.

Research Hub for Electric Technologies in Truck Applications (RHETTA) will kick off with an engagement framework to ensure pollution-impacted and low-income communities, as well as tribal communities are involved in creating and steering the initative.

Phase one of the RHETTA project will start in January to test development and implementation of the high-power electric commercial vehicle chargers near the Southern California ports of Los Angeles and Long Beach, and also the Inland Empire, a group in Riverside and San Bernardino counties that looks to improve the local community.

The project will work towards developing high-power chargers which can provide 100 miles of range in less than 10 minutes, at a cost of less than $500/kW. Each pilot site will have two charging units serving as demonstrators to test and validate their use and impact.

The testbed could serve as a template for a future state-wide charging corridor network, which would include a workforce development strategy .

The first phase of the RHETTA project will run through 2025.