Deal to include up to 8500 vehicles in next five years 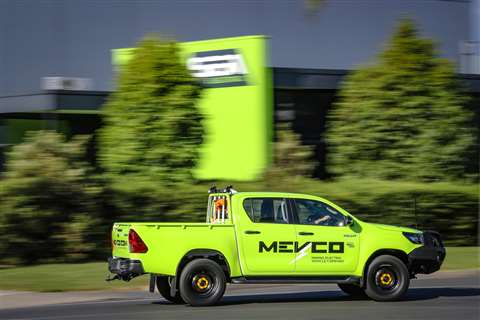 The deal between Mevco and SEA Electric will retrofit Toyotas with battery electric drive systems for use in mining. (Photo: SEA Electric)

SEA Electric said it has made the next step in its journey to electrify the world’s commercial vehicle fleet, by signing a significant Memorandum of Understanding (MOU) with Mevco, a systems integrator that is focused on electric light commercial vehicles for the mining industry.

The partnership is expected to see all-electric Toyota Hilux and Landcruiser models made available for the mining industry, with Mevco making a commitment to order 8500 units over the next five years.

“This is a pivotal partnership for the mining industry,” said Matt Cahir, CEO for Australia-based Mevco. “It enables the world’s leading EV technology for heavy and light commercial trucks to be commercialized on a scale that makes sense for the bespoke needs of the mining sector. SEA Electric’s unique architecture is perfectly suited for the task, with the system’s high-torque characteristics ideally fit for purpose.”

At the time of the launch, reportedly more than half of the 2023 allocation of the Australian-developed battery-electric vehicles have been pre-sold, with demonstration models available in Melbourne, Brisbane and Perth.

At the heart of the arrangement is SEA Electric’s proprietary SEA-Drive power-system based on a permanent magnet AC motor. Thanks to its medium‐voltage architecture and no requirement for active thermal management, SEA Electric said its solution is light, cost‐effective, and efficient, with the system tested in the field across eight countries with over 2.5 million km of real-world use registered to date.

Fast DC to DC charging is available for the system, which SEA Electric said provides up to 80% battery power in less than one hour, with a five-year factory warranty on the batteries supplied.

For users, the switch to EV reportedly provides a comfortable work environment, with health and safety considerations including no noise, fumes, heat or vibrations.

For SEA Electric, the company said the announcement is the logical next step in its expansion in the commercial vehicle space, opening possibilities for the technology on a global scale for a wide variety of applications. Founded in Australia in 2012, the company is now headquartered in Torrance, Calif.

“Across all industries, companies now understand they have a role to play in ensuring they are a part of the solution to the environmental problems we face,” said Tony Fairweather, SEA Electric founder and CEO. “With the SEA-Drive power-system, we have developed technology that is perfectly adaptable to a wide range of commercial vehicle tasks that have typically been the domain of diesel-powered engines.

“Through Mevco, the mining industry will now be able to access cutting-edge technology, which delivers top performance and total cost of ownership prospects, all with sustainability at the forefront. This deal is a significant step forward in Australia and shows just what is possible when it comes to electrifying the world’s fleets.”

Mevco is a portfolio company of RCF Jolimont, the innovation fund of Resource Capital Funds, one of the largest private equity managers in the world focused on mining.