Companies said they will strengthen their efforts to achieve carbon neutrality by 2050.

In a joint announcement, Isuzu Motors Ltd, Hino Motors Ltd. and Toyota Motor Corp. said they plan to strengthen their efforts to electrify buses as the companies look toward the achievement of carbon neutrality by 2050.

Based in Tokyo, the Commercial Japan Partnership is a commercial vehicle project launched in April 2021 to accelerate implementation and dissemination of CASE technologies and services by combining the commercial business foundations cultivated by Isuzu and Hino with the CASE technologies of Toyota while helping address various challenges facing the transportation industry as well as contribute to the achievement of a carbon-neutral society.

CASE is Toyota’s acronym for connected, autonomous, shared and electric. 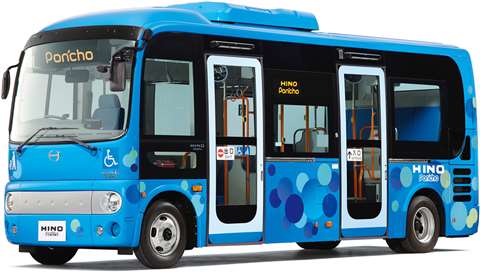 Toward the realization of a decarbonized society in 2050, Isuzu and Hino said they plan to begin production of battery electric vehicle (BEV) flat-floor route buses in 2024 at Isuzu-Hino joint venture J-Bus Ltd.

Isuzu and Hino have been collaborating in the bus business since 2002 and have been precisely responding to the requirements of bus operators in Japan. Recent rapid moves toward carbon neutrality are heightening the need for zero-emission route buses, and Isuzu and Hino intend to respond to that need.

The BEV flat-floor route bus planned for production start in FY2024 will be developed by Isuzu, and the adoption of a BEV powertrain, which will provide zero CO2 emissions during vehicle use, is aimed at contributing to the realization of a decarbonized society. Also, toward achieving zero onboard accidents, by taking advantage of the freedom of layout afforded by BEVs, the flat-floor area of the bus’s interior can be greatly expanded compared to conventional non-step buses, significantly improving travel safety.

Additionally, Isuzu, Hino and Toyota have agreed to begin studying the planning and development of next-generation fuel cell electric vehicle (FCEV) route bus based on the BEV flat-floor route bus to be produced from FY2024.

The next-generation FCEV route bus will combine the platform of the BEV flat-floor route bus scheduled for launch in FY 2024, with Toyota’s fully developed fuel cell system found in the Toyota Mirai and the SORA fuel cell bus. By sharing the same components between BEVs and FCEVs, Isuzu, Hino, and Toyota aim to significantly reduce costs, and by adopting new-generation fuel cell stacks and utilizing Toyota and Hino’s FCEV bus development know-how to date, they aim to provide longer-life, higher-added-value electrified vehicles.

Through this initiative, Isuzu, Hino and Toyota said they intend to contribute to the realization of a hydrogen-based society in Japan, by applying Japan’s strengths in fuel cell technology.

In addition to the company’s collaboration with the Toyota Group, Hino said it “aggressively pursues the creation of partnerships with like-minded organizations and provides solutions to societal issues.”

Toyota formulated its “Toyota Environmental Challenge 2050” (announced in 2015), through which the company said it will significantly reduce CO2 emissions during vehicle use and will develop and promote the use of electrified vehicle technologies.